Yashar Bashirov: “We have all the medals of Islamiad” 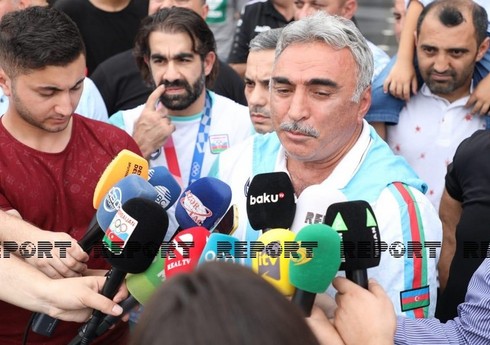 “The 5th Islamia held in our native Turkey was very successful for us. Of course, our most successful performance was in Baku.”

“Report”According to the information of the President of Azerbaijan National Karate Federation (AMKF), Yashar Bashirov said this in a statement to journalists at the Heydar Aliyev International Airport.

Commenting on the results of the karate players at the 5th Islamic Solidarity Games held in Konya, Turkey, the functionary recalled that they won 1 gold, 2 silver and 3 bronze medals: “The medals were placed in the form of a pyramid. We have all the medals. I am glad that our karate players are performing successfully in all competitions. Among 56 countries we had the most athletes. The result is very high. 3 finals means that our athletes participated in half of the gold medal matches. 6 medals say everything.”

Bashirov said that they faced unfair refereeing in the competition: “Although Asiman Gurbanli (+84 kg) defeated his opponent in the final match, the referees were unfair and gave the victory to another athlete. Irina Zaretska (68 kg) won as usual. Tural Aghalarzade (67 kg) also won. faced injustice, they did not give their points in the semi-finals. But I believe that we still have something to say.”

He also touched on the Karate1 Premier League tournament to be held in Baku on September 2-4: “This tournament will be organized for the first time in Azerbaijan. I invite everyone there. I believe that all 17 of our athletes will represent the country in the tournament.”

Madat Guliyev: “All our cyclists have reached the finish line in Islamiad”

"We look at these competitions as development and think that this is a learning process." "Report"According to the information of the Azerbaijan Cycling Federation (AVF), ... Read More

On August 9, a dinner was held in honor of the heads of state, government and delegations who participated in the opening ceremony of the ... Read More

NEWER POSTFinland and Sweden will discuss NATO membership with Turkey by the end of the month
OLDER POSTAn incident occurred in the game “Shamakhi” – “Sabail”.