Two-time winner of Islamiada: “After playing on the field, we realized that we are stronger than Mali” 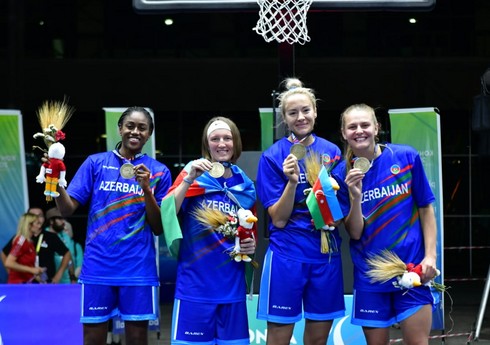 “When we reached the final, there were a lot of emotions, there was excitement. Of course, after we appeared, the excitement was behind us and we realized that we are stronger than the opponent.”

“Report”Dina Ulyanova, who won a gold medal with Azerbaijan’s 3×3 women’s basketball team at the 5th Islamic Solidarity Games, said this according to the report of the employee sent to Konya.

The Azerbaijan national team won the Islamiad by defeating the host Turkey 14:12, Kyrgyzstan 21:4, Qatar 21:2 in the quarter finals, Uzbekistan 16:7 in the semifinals and Mali 21:6 in the final in group C. It is interesting that the women’s basketball team of Azerbaijan won gold medals at the 4th Islamic Solidarity Games held in Baku 13:7 over Mali 5 years ago.

Dina Ulyanova, who was part of that team, said that it was more difficult for them to win in Baku: “It was more difficult in Baku. Because we were playing in front of our own fans, we felt extra responsibility. I am glad that we won the Islamiad for the second time in a row.”

Preparation of joint projects in the field of tourism between Azerbaijan and Turkey, increase of cooperation opportunities, organization of promotional information tours for representatives of ... Read More

Before the “Neftchi” – “Aris” match, the children of martyrs came to the field

"Neftchi" club took a significant step before the return match of the second qualifying round of the UEFA European Conference League against "Aris" of Cyprus. ... Read More

Tarlan Ahmadov: “We would like “Kepaz” to play on its own field”

"We will take every chance we get and try to score points." "Report"According to the information of the Western Bureau, the new head coach of ... Read More

NEWER POSTDeputy Minister: “Customs control between Azerbaijan, Georgia and Turkey will not be repeated”
OLDER POSTAnnual inflation in Austria has reached a 47-year high