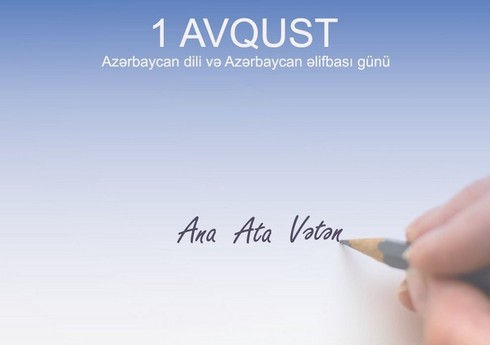 “Report” reminds that this significant day was established according to the Decree of national leader Heydar Aliyev dated August 9, 2001.

The great leader signed the Decree, taking into account that the transition to the Latin script Azerbaijani alphabet was fully ensured in our country in August 2001, and that the use of the new alphabet was an important event in the social and political life of independent Azerbaijan, and in the history of our written culture.

Despite the obstacles created during the Soviet era, the Azerbaijani language, which has unshakable foundations, managed to maintain its existence. In 1945, the establishment of the independent Institute of Linguistics within the Azerbaijan Academy of Sciences gave a serious impetus to the development of our linguistics as a science. In the following years, the services of the great leader Heydar Aliyev in the direction of protecting the Azerbaijani language from current threats and protecting it for future generations should be specially mentioned. In 1977, when the new Constitution of the USSR was approved, the National Leader, who did not agree with the fact that the article about the state language was not included, showed his principled position on this issue until the end. On April 2, 1978, at the seventh session of the Supreme Soviet of the ninth convocation dedicated to the draft of the Constitution of the Azerbaijan Soviet Socialist Republic and the results of its public debate, it was decided to amend Article 73 at the insistence of the great leader Heydar Aliyev, who delivered a report. This change reflects the fact that the state language of the Azerbaijan Soviet Socialist Republic is Azerbaijani. Despite all the difficulties, the achievement of such a historic decision by the National leader was a big step in the development of our language, which is considered the basis of our spiritual existence.

The great leader’s efforts to protect and develop the Azerbaijani language from the negative effects of the globalization era are irreplaceable contributions for our people. The decrees signed by H. Aliyev on July 18, 2001 “On improving the implementation of the state language” and “On the establishment of the Azerbaijani alphabet and Azerbaijani language day” signed on August 9 of the same year are among the unparalleled services rendered by him in terms of the protection and development of our mother tongue. On January 2, 2003, with the Decree of the great leader Heydar Aliyev, the Law of the Republic of Azerbaijan “On the State Language in the Republic of Azerbaijan” came into force. In the law, the main duties of the state to care for the mother tongue are clearly specified.

Despite all obstacles and difficulties, the political line of the national leader, who took great steps to protect our mother tongue, is confidently continued by President Ilham Aliyev. According to the Decree “On the implementation of mass publications in the Azerbaijani language with Latin script” signed by the head of state on January 12, 2004, a list of works to be printed in the Azerbaijani alphabet with Latin script is prepared every year. In addition, on January 14 of the same year, “On the publication of the Azerbaijani National Encyclopedia”, as well as on December 30, 2007, “On the approval of the list of works of prominent representatives of world literature to be published in the Azerbaijani language” application has been implemented. Taking into account the requirements and realities of the modern era, the President’s approval of the “State Program on the use of the Azerbaijani language in accordance with the requirements of the time and the development of linguistics in the country” with the Decree dated April 9, 2013, in terms of protecting the purity and richness of our mother tongue, which is the mirror of our national and spiritual existence is an important historical event. The purpose of the State Program is to increase the state’s attention to the use and study of the Azerbaijani language during the period of 2013-2020, to use our language in accordance with the requirements of the time in the conditions of globalization, and to improve linguistic research in the country. At the same time, the document envisages the unification of creative efforts aimed at the development of fundamental and applied research in the leading directions of linguistics and the connection of linguistics with the current problems of modern society. The Decree of the head of state “On measures related to the protection of the purity of the Azerbaijani language and the further improvement of the use of the state language” dated November 1, 2018 is a successful continuation of the purposeful language policy, which was founded by the great leader Heydar Aliyev and aimed at the development of our mother tongue.

An Azerbaijani athlete won a gold medal at the U-20 World Beach Wrestling Championship held in Constanta, Romania. "Report"According to the information, Farid Jabbarov (90 ... Read More

NEWER POSTIn Peru, a minibus rolled into a cliff, 16 people died
OLDER POSTMikayil Jabbarov: “Conditions have been created for the transition to a qualitatively new stage of development in Azerbaijan”