The winner of the Volleyball Victory Cup has been announced 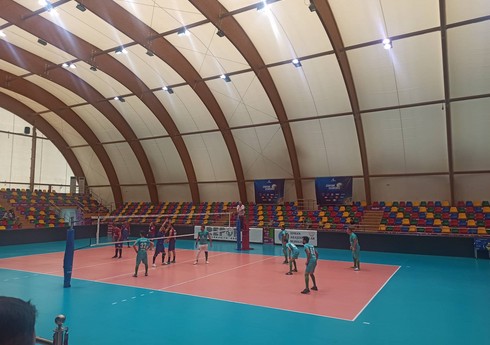 “Report”According to the information, “Kalbajar” and “Shusha” teams met in the final game held at Darnagul Volleyball Center.

Before the decisive match, the first vice-president of AFV, Faig Garayev, the head of the football sector of the Ministry of Youth and Sports, Fikret Huseynov, and participants of the Patriotic War, “For the Motherland”, “For Bravery”, “For distinction in military service”, Fuzuli, Khojavand, were the guests of honor before the decisive match. and Colonel-Lieutenant Vusal Nagiyev, who was awarded medals for the liberation of Aghdam, as well as PR and marketing manager of “Avrora Group” Elvin Babayev spoke.

Greeting the participants, F. Garayev wished mercy to the martyrs and good health to the veterans: “God knows what we suffered during the war. It is an honorable day that the Volleyball Victory Cup is being held today. I would like to thank the organizers of the competition. I ask that this tournament be organized every year. I promise that the hall will be full of fans at this competition next year. I congratulate journalists, especially media representatives working in the field of sports, on the occasion of the National Press Day. They work side by side with us and cover our achievements. Our halls are open to journalists and veterans. Anytime you want, here you can practice”.

F. Huseynov personally congratulated the journalists on behalf of the Minister of Youth and Sports, Farid Gayibov. Expressing his gratitude to the people who organized the tournament, the official of the ministry wished success to the teams competing in the final.

Participant of the Patriotic War V. Nagiyev expressed his gratitude for being invited to the tournament: “I congratulate all journalists on the occasion of the National Press Day, I wish you all success. It is a matter of pride that the teams of Shusha and Kalbajar reached the final. I wish God’s mercy to our martyrs who put an end to 30-year longing, and healing to our veterans “Both teams are native to me.”

In the end, E.Babayev shared his thoughts: “Today is a significant day. We are holding the Victory Cup on National Press Day, we are experiencing a double celebration. I wish success to the teams on behalf of “Avrora Group. A healthy body has a healthy soul. From now on, under this motto, various we will meet at the competitions”.

After the speeches, the martyred journalists Maharram Ibrahimov and Siraj Abishov, as well as the deceased journalists Elnur Ashrafoglu and Mazahir Suleymanzade, were commemorated with a minute of silence.

It should be noted that the main sponsor of the Victory Cup is “Avrora Group”, the information supporter is “Report” agency.