The Turkish flag was raised in New York 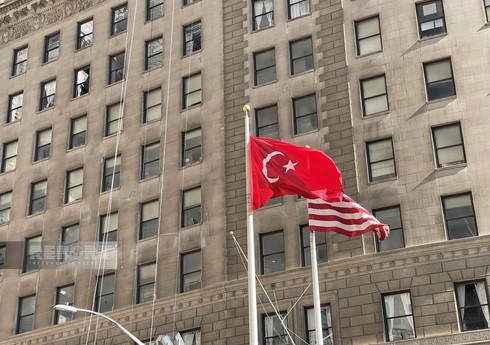 On October 29, the flag of Turkey was raised in New York, USA, on the occasion of the Republic Day.

“Report”The local bureau of Turkey reports that the national symbol of Turkey is hung from a huge flagpole in the “Bowling Green” park located on “Wall Street”, which is considered the financial center and one of the most visited streets by tourists.

E. Adams and Turkish Consul General in New York Reyhan Özgür raised the flags of Turkey and USA to the sky accompanied by the national anthems.

In the speeches, it was said that for 44 years now, the Turkish flag has traditionally flown in the center of New York every year on Republic Day.

Congratulating the people of Turkey on the occasion of the Republic Day, the mayor said that he is ready to support all the projects of the societies operating in New York.

October 18 - On the occasion of Azerbaijan's Independence Day, the flag of our country was hung on a huge flagpole in Bowling Green Park, ... Read More

The Heydar Aliyev Center was illuminated with the flag of Turkey

On the occasion of the Republic Day of Turkey, the Heydar Aliyev Center was illuminated with the flag of this country. "Report" reports that it ... Read More

Soldiers of the armed forces of Ukraine control the center of the city of Izyum (Kharkov region) and have already raised the country's flag over ... Read More

NEWER POSTA fire broke out in the Baku Health Center
OLDER POSTErdogan: “Turkey’s national electric car will decorate the roads of many countries of the world”