The robot broke the finger of a young chess player 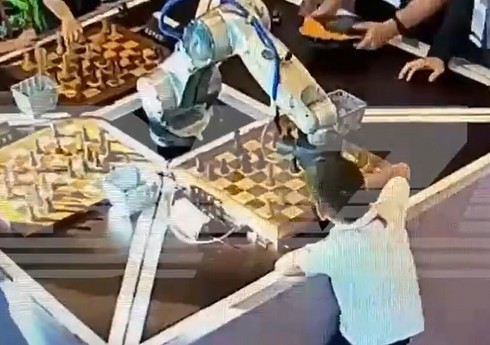 An unpleasant incident occurred at the “Moscow Open” chess tournament held in Russia.

“Report”According to the report, the robot broke the finger of a 7-year-old child who was playing chess with it.

Sergey Lazarev, the president of the Moscow Chess Federation, confirmed that such an event took place. He said that the robot injured the young chess player due to its rapid movements.

The child’s parents plan to file a complaint with the relevant authorities about the incident.

Lionel Messi, the star player of the French club PSG, broke the record of Cristiano Ronaldo, who played in the English "Manchester United". "Report"According to ... Read More

A fire broke out in “Sadarak” Shopping Center

The 112 "Gaynar" telephone line of the Ministry of Foreign Affairs received a report about a fire in the territory of the "Sadarak" Trade Center. ... Read More

A fire broke out in the restaurant “Light crimes” in Baku

A fire broke out in a restaurant in Baku. "Report"According to the information obtained by Currently, employees of the Ministry of Emergency Situations have been ... Read More

NEWER POSTPeople who were going to a wedding from Gusar to Khachmaz had an accident, there were dead and injured
OLDER POSTRussian opposition MP: “Putin has brought the country to a dead end”