The number of dead in the explosion in the shopping center in Yerevan has increased, dozens are missing 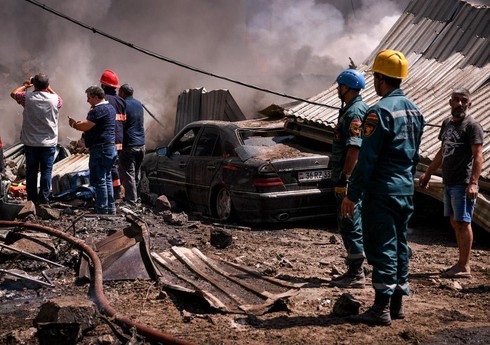 Another body was pulled out from under the ruins of the “Surmalu” shopping center in Yerevan, the capital of Armenia.

“Report” reports with reference to local media that the press secretary of the Ministry of Emergency Situations of Armenia Ayk Kostanyan said about this.

“Rescuers have just pulled out another body from the rubble. There are currently 8 bodies. Search and rescue operations are ongoing,” he said.

It should be noted that on August 8, 8 people died and went missing as a result of an explosion in the “Surmalu” Shopping Center. 350 rescuers are involved in the search and about 150 volunteers are helping them. The total number of victims is 61 people. The treatment of 13 of the wounded is being continued in different hospitals, their health condition is assessed as satisfactory.

The Ministry of Internal Affairs of Armenia said that 23 people were missing in the explosion that took place in the “Surmalu” shopping center in Yerevan yesterday.

“Report” Referring to the Armenian press, it is reported that among them there are 1 citizen of Russia and 6 citizens of Iran.

The Ministry of Emergency Situations announced the names of those who went missing as a result of the explosion in the shopping center. According to information, along with Armenians, in the explosion Lyuba Gribova (born in 1959, citizen of Russia), Iranian citizens – Maryam Fathi, Vanya Fathi (born in 2016), Edris Fathi, (2002), Kiomars Fathi (1972) ), Monira Naderi, Mehri Tahuri are missing.

“Al-Arabiyya”: There was intense shooting in the center of Tripoli

There was a shooting in the center of Tripoli, the capital of Libya. "Report" "Al-Arabiyya" TV channel reported on this. "Intensive shooting was recorded in ... Read More