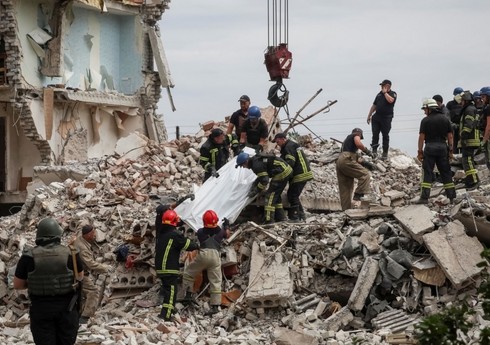 The death toll has reached 43 after Russia’s missile attack on the Ukrainian city of Chasovoy Yar.

“Report” reports that the State Service of Emergency Situations published information about this on Facebook.

Employees of the General Administration discovered the bodies of 43 people, including one child, from under the rubble of a 5-story residential building destroyed by shell fire in Chasov Yar. 9 people were rescued from the rubble.

According to the information provided by the State Emergency Service, more than 420 tons of destroyed parts of the building have been cleaned and dismantled, and the works are continuing.

Stanislav Cherchesov: “Garabagh” is a strong team and played well in attack.

"Actually, we started the game badly and finished it badly. In our opinion, we should have won. But in practice, we didn't do it." "Report"According ... Read More

NEWER POSTThere was a road accident in Shamkir and there are injured people
OLDER POSTChampions League: an early goal was scored in the match between “Qarabag” and “Lex”.