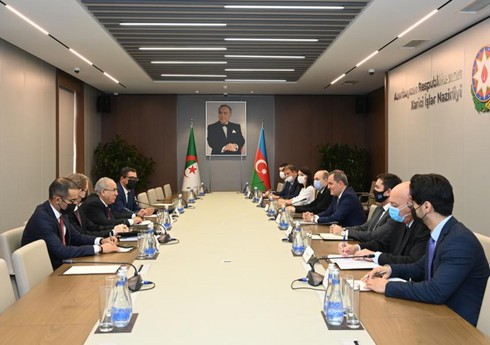 “Report” was informed about this by the Ministry of Foreign Affairs of Azerbaijan.

After the one-on-one meeting, a wide-ranging meeting was held between the ministers with the participation of the delegations of both sides.

Minister Jeyhun Bayramov welcomed the guest and conveyed his sincere congratulations on the 60th anniversary of Algeria’s independence. The minister emphasized that there is a wide potential for the further development of friendly and cooperative relations between Azerbaijan and Algeria. Talking about the importance of political dialogue and mutual visits between the two countries, the minister mentioned the historic visit of former Algerian President Abdelkader Bensalah to Azerbaijan to participate in the 18th Summit of the Non-Aligned Movement in October 2019 and his meeting with the President of the Republic of Azerbaijan, June 30 – July 1, 2022. In 2016, the Chairman of the National People’s Assembly of Algeria, Ibrahim Bougali, noted with satisfaction the participation of the Non-Aligned Movement Parliamentary Network in the Baku Conference, as well as the participation of the Algerian representative in the Youth Summit of the Non-Aligned Movement.

Algerian Foreign Minister Ramtan Lamamra expressed gratitude for the warm reception and noted the importance of maintaining the current political dialogue and the intensity of bilateral contacts between our countries. He emphasized issues such as further expansion of the dialogue between the Ministries of Foreign Affairs and various institutions of our countries, the development of energy and economic cooperation, and the creation of friendship groups between communities. Minister Lamamra spoke about the founding membership of the Non-Aligned Movement of Algeria and its activities during its chairmanship, and said that the initiatives promoted by our country within the framework of Azerbaijan’s chairmanship from 2019 are important. He informed about the political processes in the Middle East, the work done within the framework of the League of Arab States and the African Union. He said that it is important to solve every problem at the international level based on the norms and principles of international law.

Minister Jeyhun Bayramov told the other party about the aggression of Armenia against our country for 30 years, the post-conflict situation in the region after the 44-day Patriotic War in 2020, issues related to the implementation of tripartite declarations, the reconstruction of the liberated territories, and the large-scale measures taken by Azerbaijan regarding peace building. brought detailed information about the work to the attention of the guest. Information was given on the activities of Armenia contrary to its obligations and the obstacles it caused to peace building. It was emphasized that Algeria unequivocally supports the respect for the sovereignty and territorial integrity of our country and its borders recognized at the international level and demonstrated this position during the adoption of various resolutions, including international organizations.

In addition to the bilateral framework, cooperation issues were discussed between our states in multilateral international and regional formats, including the UN, the Non-Aligned Movement and the Organization of Islamic Cooperation.

The parties also exchanged views on regional and international issues of mutual interest.

Later, at the press briefing, the Ministers made statements on the results of the meeting.

“Report” informs that the Ministry of Foreign Affairs of Azerbaijan published information about this on Twitter.

Currently, a comprehensive meeting is being held with the participation of delegations.

The visit of Ramtan Lamamra, Minister of Foreign Affairs and National Community Abroad of Algeria, special representative of President Abdelmajid Tebbou, to Azerbaijan has begun.

“Report” informs that the Ministry of Foreign Affairs released information about this.

Currently, a meeting is being held between Azerbaijani Foreign Minister Jeyhun Bayramov and his Algerian counterpart.

J. Bayramov welcomed Ramtan Lamamra in front of the ministry. Later, the one-on-one meeting of the ministers began.

Deputy Minister of Foreign Affairs of Turkey: “We wish the people of Azerbaijan patience”

The Ministry of Emergencies (Emergencies Ministry) released information about the fire on the ship in Puta Sea Port. "Report" informs with reference to the Ministry ... Read More

NEWER POSTPrime Ministers of Ukraine and Norway discussed the fight against Russia
OLDER POSTIn Islamia: Azerbaijan secured the next medals