The fire continues in the warehouse of “Surmalu” market in Yerevan 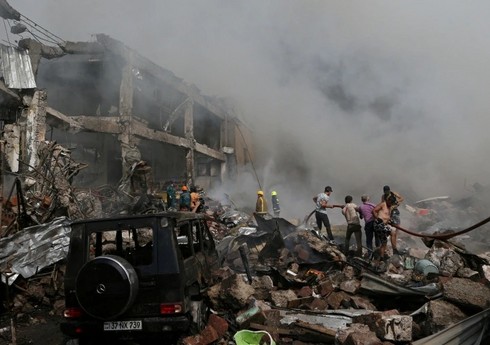 Minister of Emergencies of Armenia, Armen Pambukhchyan, announced the latest situation in the area after the explosion in the “Surmalu” wholesale shopping center in Yerevan.

“Report” According to the minister, the search for 18 people is currently ongoing.

23 of the injured were admitted to different hospitals.

Pambukhchyan noted that there are still pyrotechnic materials and flammable plastic products in the warehouse: “Fires may break out in a few days, rescuers are ready for this. Currently, only the area of ​​the warehouse is on fire, the fire has been extinguished in the rest of the areas. As for the work of the rescuers, yesterday there were 350 people working at the scene, and now their number is about 70.”

The minister also said that 7 rescuers were injured in various degrees: “2 of them were admitted to the hospital, and the others received medical assistance on the spot.”

It should be noted that on August 14, 6 people died as a result of a strong explosion and fire in the “Surmalu” shopping center.

"Russia continues to work face-to-face with Baku and Yerevan for the purpose of opening transport communications in the South Caucasus through a profile tripartite working ... Read More

In accordance with the combat training plan of the current year, the preparation process for the new training period continues in the types of troops, ... Read More

Aiming to make communication more accessible to everyone, "Nar" expresses its support for the September 23 International Day of Sign Language adopted by the UN. ... Read More