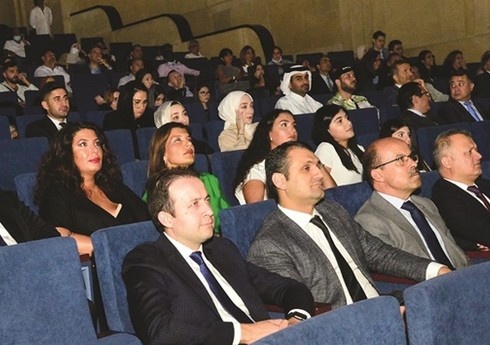 The film “Mahmud and Maryam” based on the novel of the same name by the prominent Azerbaijani writer Elchin Efendiyev was shown at the Drama Theater of Qatar.

“Report” informs about this with reference to “Gulftimes.com”.

The screening of the film took place on the joint initiative of the Embassy of Azerbaijan in this country and Qatar.

Ambassador of Azerbaijan Rashad Ismayilov, President of the Turkish Culture and Heritage Foundation Gunay Efendiyeva, Ambassador of Turkey to this country Mehmet Mustafa Göksu, other diplomats and representatives of the Azerbaijani community in Qatar took part in the ceremony.

Before the screening of the film, R. Ismayilov thanked Qatar for their help and support.

In her speech, G. Efendiyeva expressed her gratitude to the Embassy of Azerbaijan and the government of Qatar.

The portal noted that “Mahmud and Maryam” was shot by Turkish director Mehmet Ada Öztekin in 2013 as the first joint project of Azerbaijan and Turkey:

Aras Bulut Iynemli and Eva Dedova play the main roles in the feature film dubbed into Arabic, shown in Qatar for the first time in Arab countries, and about the lives of two young people from different worlds. The events in the film take place in the 15th century.”

The Heydar Aliyev Foundation and the BP company presented to the public a new film promoting the ancient and rich history and culture of Azerbaijan. ... Read More

A film has been prepared about the late journalist Aynur Mirhasan