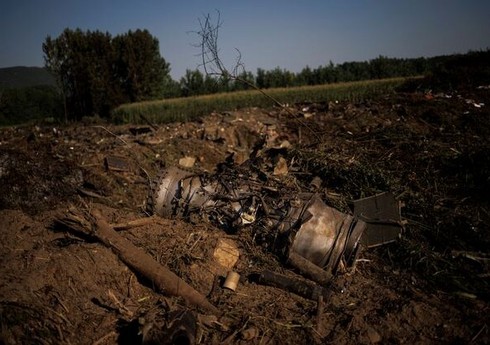 The Ukrainian “An-12” aircraft, which crashed in Greece, was carrying 11.5 tons of Serbian weapons to Bangladesh, and the information about the transportation of weapons to Ukraine is biased and false.

“Report” informs that these words were said by Nebojsa Stefanovic, Deputy Prime Minister and Minister of Defense of Serbia.

According to him, the plane was carrying Serbian-made lighting and training mines:

“I am appealing regarding the crash of the An-12 plane that took off from our Niš airfield yesterday in Greece. We are talking about the “Antonov-12” aircraft, tail number MEM3032, belonging to the Ukrainian “Meridian” company. Unfortunately, all eight crew members were killed in the crash. The plane took off from Nis, Serbia at 20:40 local time (22:40 Baku time) and was supposed to deliver 11.5 tons of our defense industry products to the Ministry of Defense of Bangladesh as a fully authorized buyer.”

The Minister of Defense of Serbia said that the country has not provided weapons to Ukraine since 2016.

Meanwhile, the Greek Ministry of Defense is sending experts from the nuclear and biological defense unit to the crash site of the Ukrainian An-12 plane.

Local residents were asked to close windows and doors until experts found out what substance was on board the plane. Currently, two teams of explosive specialists are at the crash site of the An-12.

“Antonov An-12BK” cargo plane belonging to Ukraine crashed near the city of Kavala in northern Greece.

“Report” informs that “Greek City Times” published information about this.

“The Ukrainian An-12 plane crashed in the north of Greece after the pilot declared a state of emergency in the south of the island of Thassos while flying from the Nis airport in Serbia to Amman, the capital of Jordan. Unfortunately, the plane did not reach the Kavala airport,” the publication’s website said.

At the time of the incident, there were 8 people on the cargo plane. There is no information about their fate.

A car carrying about 15 illegal migrants crashed near the Bulgarian city of Burgas. "Report" informs that the Bulgarian national television broadcasted information about this. ... Read More

A bus carrying 43 citizens of Ukraine overturned near the city of Vrancea in the east of Romania. "Report" about this “Digi24”reports with reference to ... Read More

A minibus carrying tourists fell into a cliff in Turkey, 18 people were injured

A minibus carrying tourists returning to the city of Malatya from the Black Sea coast in Turkey fell into a cliff. As a result, 18 ... Read More

NEWER POSTMore than 1,200 trucks have gathered at the Latvian-Russian border
OLDER POSTGermany does not have enough gas reserves to last the winter