Fuad Muradov, the chairman of the State Committee for Work with Diaspora, who is on a visit to the Federal Republic of Germany (FRG), met with the Azerbaijani community in Dortmund.

“Report” With reference to the committee, it is reported that in the meeting, which began with the playing of the National Anthem of Azerbaijan and the commemoration of the dear memory of our martyrs, who died for the territorial integrity of our country, with a minute of silence, representatives of the Embassy of Azerbaijan in the FRG and the Consulate General of Turkey in Essen, members of the Board of Directors of the German-Azerbaijani Alliance, Germany’s 31 Activists of the Azerbaijani diaspora living in the city, members of the Turkish community and southern Azerbaijanis took part.

Declaring the meeting open, the Chairman of the Committee first congratulated the participants of the event on the occasion of the entry of the Azerbaijani Army into the city of Lachin, and expressed his gratitude to the President of Azerbaijan, Supreme Commander-in-Chief Ilham Aliyev and our heroic soldiers for this historic event.

The chairman of the committee has made a wide report on the multifaceted activities carried out by DIDK, systematic projects, Coordination Councils, Azerbaijan Houses, weekend Azerbaijani schools, Diaspora Youth Summer Camps.

He emphasized the importance of protecting the features of Azerbaijani ideology and national identity, in this direction he reminded the recommendations of the head of state to our compatriots living abroad at the 5th Congress of World Azerbaijanis, establishing close cooperation relations with German political circles in the direction of gaining influence of diaspora organizations among the local society, strengthening their influence on public opinion, and promoting Azerbaijani truths. and expressed his gratitude to the big diaspora family.

Numerous diaspora representatives spoke at the event and voiced interesting ideas and suggestions. Most of the diaspora activists considered it desirable to open an Azerbaijan House and a weekend Azerbaijani school in Düsseldorf.

The meeting ended with interesting discussions and answering questions. 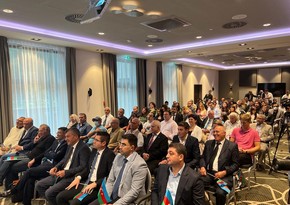 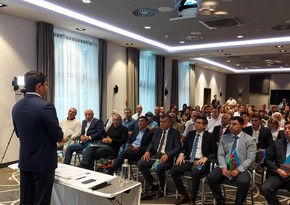 The health of Azerbaijanis detained in Ukraine has deteriorated

Jeyhun Bayramov: “Pressure should be put on Armenia regarding missing Azerbaijanis”

It is important to obtain information about the missing persons, to continue relevant work to determine the fate of more than 3,800 Azerbaijanis, and to ... Read More

NEWER POSTThe Office of the President of Ukraine announced the terms of the negotiations with Russia
OLDER POSTBoris Johnson: “The coming months will be difficult for the British”