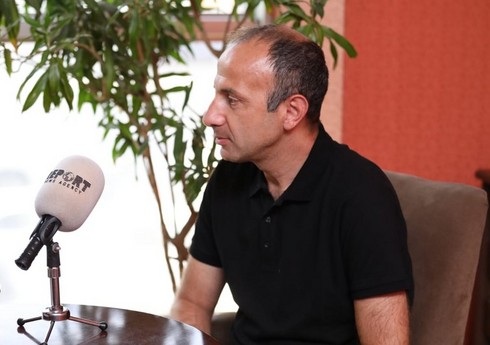 “Nijat Ismailli, who controls the VAR system, did a very good job.”

“Report”According to the information of AFFA Referees Committee Chairman Barysh Simsek, in the “Our Football” program broadcast on “CBC Sport”, the head coach of “Zira” Rashad Sadigov and “Sumgayit” had a scoreless draw in the third round match of the Premier League. (video-assistant referee) – ed.) said while commenting on his opinion regarding judge Nijat Ismailli.

The Turkish expert said that the referee took the right step: “I respect Rashad Sadigov. In fact, as he said, everything happened as it should have happened. Our referees fully follow the rules and see everything. We trained the clubs before the season. Maybe our own We haven’t been able to fully convey our ideas to them. Training will be held again. I know that the head coaches will object again. Our referees are fully prepared. But they are inexperienced with VAR. We will talk about better things next year.”

Touching on the fact that team members watched the controversial episode together with the referees, Simshek criticized Ravan Hamzazade, who did not show a yellow card at that moment: “You need to pay attention to such things. The referees must be decisive. In such cases, if necessary, they should show a red card. You cannot interfere with the referee while he is watching the episode. “.

According to him, the biggest problem at the moment is related to time: “A decision must be made in a short time. But as I said, this is normal in the present case. If we want justice, it is time at a cost. There is no other way. Maybe in the future, a new system will eliminate this waste of time, even for judges. was created. I agree, it took a long time to evaluate the episode. It is not only about the head coach of “Zira”. The judges had difficulty understanding each other.”

Şimşek emphasized that he was satisfied with VAR’s work in the first 3 rounds: “We look at the episodes with different eyes. I think the first 3 rounds were successful. It is true that we have made mistakes, but we accept it as normal. Our judges have just started this work. Our only experienced referee is Aliyar Agayev. We cannot divide it into 5 parts and send it to matches (laughs). This season, VAR will be talked about more than referees. We should try to make them speak positively. The current picture is not bad. VAR was brought in for football, not refereeing. If it interferes with everything, time will pass. We will try to make everyone happy. As the championship gets more intense, our work will be more difficult.”

It should be noted that Rashad Sadigov asked for more experienced referees to be appointed to VAR at the post-match press conference.

The chairman of the Energy Regulatory Agency received the citizen

Samir Akhundov, Chairman of the Management Board of the Energy Regulatory Agency (AERA) subordinated to the Ministry of Energy, received the citizen. About it "Report"was ... Read More

Chairman of the European Commission: “We will help restore Ukraine on the EU path”

The chairman of the Azerbaijan Cultural Center in Serbia has died

Zarifa Alizadeh, the chairman of the Azerbaijan Culture Center operating in Belgrade, the coordinator of the East European Azerbaijanis Coordination Council for Serbia, died after ... Read More

NEWER POSTChina’s purchase of oil, gas and coal from Russia has reached a record volume
OLDER POSTA car overturned in Gadabey and there are injured people