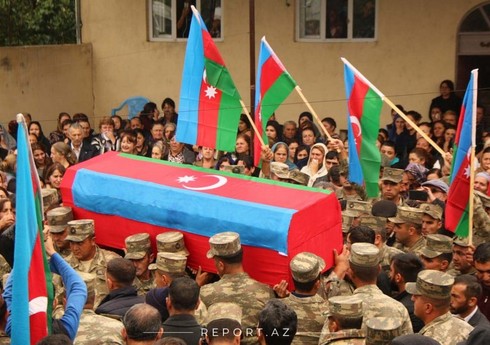 The body of Aliyev Tahir Chingiz oglu, a full-time military serviceman who died as a result of a rock falling on him in Lachin district yesterday, was handed over to his family.

“Report”According to the information of the Western Bureau, the body of T. Aliyev, born in 2002, was taken to Agstafa region.

He will be buried today in Shahidler Khiyaban in Yenigun village cemetery of the region.

It should be noted that on August 5, while performing a combat mission in a difficult terrain in Lachin district, a piece of rock that broke off from the steep cliffs fell on the active military servicemen of the Azerbaijan Army, soldier Samir Samad oghlu Khudiyev and soldier Aliyev Tahir Chingiz oghlu. As a result, soldier Samir Khudiyev died on the spot from his injuries.

Soldier Tahir Aliyev received various injuries. Despite the efforts of doctors, it was not possible to save his life.

A criminal case has been initiated and an investigation is underway.

The President of the Republic of Azerbaijan Ilham Aliyev got acquainted with the conditions created in the newly built secondary school No. 2 in Saray ... Read More

The President of the Republic of Azerbaijan Ilham Aliyev and the First Lady Mehriban Aliyeva got acquainted with the conditions created after the major renovation ... Read More

Ilham Aliyev: “Tokayev’s official visit to Azerbaijan is a manifestation of friendship and brotherhood between our peoples”

"The official visit of the President of Kazakhstan Kasim-Jomart Tokayev to Azerbaijan is a manifestation of friendship and brotherhood between our peoples." "Report" reports that ... Read More