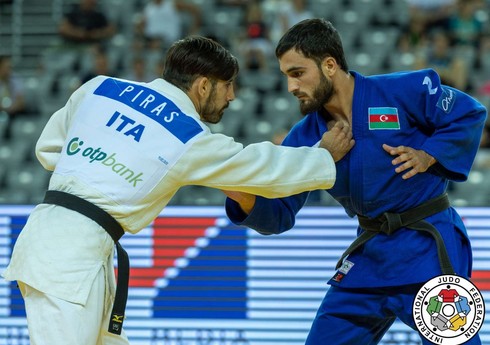 “In February, I lost in the final at the Grand Slam held in Tel Aviv, the capital of Israel. I won the Grand Prix in Zagreb, the capital of Croatia, and won my first medal of the highest caliber in prestigious senior competitions.”

This “Report”Azerbaijani judoka Yashar Najafov, who won a gold medal in the 66 kg weight class at the Zagreb Grand Prix, said in his statement.

The 23-year-old athlete expressed his opinion about the matches: “One week before this competition, we went through a difficult preparation process at the training camp of the national team in Poreč, Croatia. However, the main reason why I won the competition was that I was well adjusted to the tournament. I had high self-confidence, I went to every match to win I went out, I didn’t get tired. Our new head coach Richard Trautman also explained how to fight with opponents. I was winning according to his plan. My toughest opponent in the 1/4 finals was Kazakhstan’s world and Asian champion, silver medalist of the Rio-2016 Summer Olympics Yeldos Smetov happened”.

Najafov also talked about his competition with experienced judoka Orkhan Safarov at 66 kg. He said that he did not know who would go to the 5th Islamic Solidarity Games to be held in Konya, Turkey in August, and to the World Championship to be held in Tashkent, the capital of Uzbekistan, in October: “Ibrahim Aliyev is also in this weight, there is strong competition. We are still given a week’s rest. Until the World Championship, the Grand Slam and no Grand Prix tournaments”.

In an interview with the International Judo Federation, he clarified that he spoke in English:

“I have studied English since school. I know it a little below the average level. This is because we communicate with foreign athletes.”

A minor Azerbaijani migrant was rescued in Italy

A minor Azerbaijani migrant was rescued in Italy. About it “Report” reports with reference to the local press. According to information, the incident took place ... Read More

As of July 1 of this year, the nominal effective exchange rate of the Azerbaijani manat compared to foreign currencies was 91.9 points. Read More