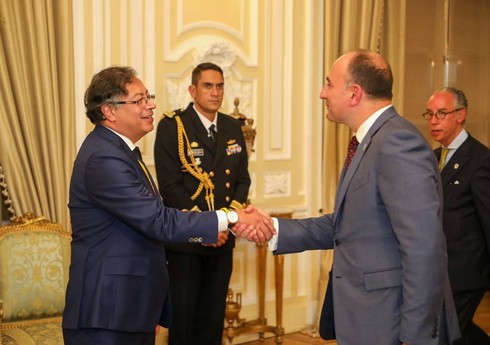 “We talked about the importance of our bilateral relations and cooperation in various fields, including the economic potential,” the ambassador noted.

Azerbaijan’s ambassador to Latin American countries previously participated in the swearing-in ceremony of the new President of Colombia.

In Colombia, Gustavo Petro, who was elected as the President of the country from the “Historical Pact” coalition of leftist parties, began to exercise the powers of the head of state on August 8.

He is the first President representing the left forces of Colombia. In the elections held on June 19, 50.4% of voters voted for Petro. His main rival, Rodolfo Hernandez, who represents the “League of Rulers Against Corruption” political movement, received 47.3% of votes.

On August 18, President of the Republic of Azerbaijan Ilham Aliyev accepted the credentials of the newly appointed Ambassador Extraordinary and Plenipotentiary of the Republic ... Read More

The President accepted the credentials of the new ambassador of Argentina

On August 16, the President of the Republic of Azerbaijan Ilham Aliyev accepted the credentials of the newly appointed Ambassador Extraordinary and Plenipotentiary of the ... Read More

Nuland: “The US ambassador to Russia will be the first woman”

"The US ambassador to Russia will be the first woman, and she will take up her duties next week." Referring to foreign media, "Report" informs ... Read More