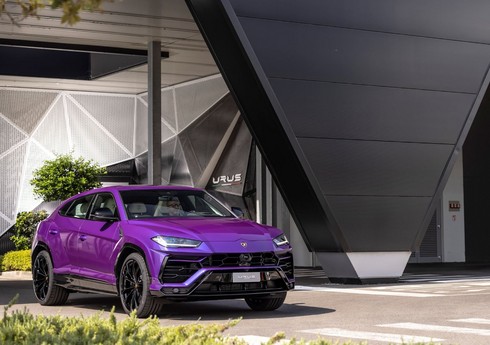 The jubilee copy of the “Lamborghini Urus” crossover, which caused great interest, was sent to Azerbaijan for presentation to the buyer.

The first quarter of 2022 can already be considered a record for Lamborghini. The Italian brand delivered 2,539 cars to customers, surpassing not only 2020 (+ 31%), but also 2021 (+ 5%). More cars were sold in three months than the Countach produced in 16 years, and the Urus crossover accounted for almost half of them. Despite its launch in 2018, Lamborghini is already celebrating the launch of its “20,000th” car.

According to the company’s calculations, customer crossovers have traveled 360 million kilometers. “Urus” traveled 114 cities in four months before the “World Tour” was released on Sunday. As a whole, the car traveled to Japan and Iceland, the island of Sardinia, Nazare Beach in Portugal, Altai, and crossed the Umling La Pass (5,798,251 m), the highest mountain road in the world. In 2021, “Urus” set a speed record on ice on Lake Baikal.

The purple “Viola Mithras” crossover “Urus” with black brake supports and a panoramic roof is equipped with a 4-liter “V8 biturbo” engine producing 650 horsepower and 850 Nm of torque and the ANIMA control modes system. The car accelerates to 100 km/h in 3.6 seconds, and to 200 km/h in 12.8 seconds. The maximum speed of the crossover is 305 km/h.

“Lamborghini Baku” organized a grand presentation ceremony to hand over the “Lamborghini Urus” crossover to its buyer. We share with you some images from the event, which was attended by many well-known personalities.

A road accident occurred in Baku, resulting in the injury of a pedestrian. According to "Report", the incident was recorded near Khatai district of the ... Read More

A 61-year-old man was hit by a car in Baku. According to "Report", the incident was recorded in Khatai district. Abdulrahmanov Veli Ali oglu, born ... Read More

"Russia continues to work face-to-face with Baku and Yerevan for the purpose of opening transport communications in the South Caucasus through a profile tripartite working ... Read More