“Sumgait” has transferred a legionnaire striker

“Sumgait” FC, which continues its transfer activities for the 2022/23 season, has recruited another player to its team.

“Report” Referring to the official website of the Sumgayit club, it is reported that Almir Aganspakhichi, a representative of the youth city, joined the team.

The club took the Bosnian striker who spent the last season in “Cukaricki” on a 1-year lease. The 25-year-old football player will play in “Sumgayit” FC in uniform number “9”.

It should be noted that during the career of Almir Aganspahic, he played for “Sarajevo”, “Mladost” (Kakan), “Krupa”, “Celik”, “Osiyek” of Croatia, “Raufoss” of Norway, “Novi Pazar” and “Cukaricki” of Serbia. worked for success. Aganspakhic was also involved in the U-17, U-18 and U-21 national teams of Bosnia and Herzegovina. 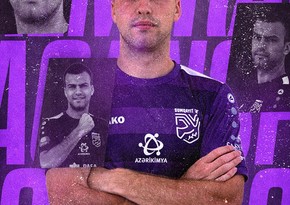 “Garabagh” legionnaire: “We played against a very good team”

"We played against a very good team." "Report"according to the information of "Qarabag" football player Abdullah Zubir told reporters after the first game of the ... Read More