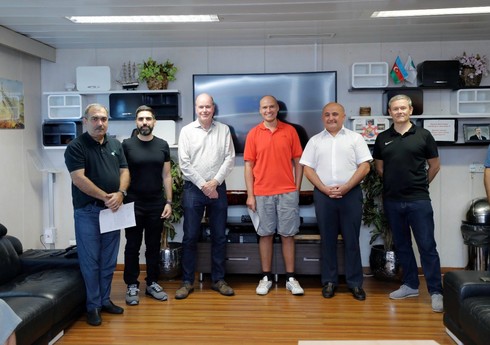 A SOCAR delegation visited the “Central Azeri” platform with the participation of Israfil Mammadov, a member of the Supervisory Board of the State Oil Company of the Republic of Azerbaijan (SOCAR) and Rovshan Najaf, the president of SOCAR.

SOCAR-and “Report”According to the information provided, the visit was to inspect the “Central Azeri” platform, which was put into operation in 2005 as part of the development of the “Azeri-Chirag-Guneshli” field block and is intended for the technological processing of 420 thousand barrels of oil per day, and to get to know its activities. , aimed to discuss current and prospective optimization opportunities.

The delegation was informed about the management of the “Central Azeri” platform, current operations, modern technological and security systems, as well as planned projects.

Within the framework of the visit, the delegation held a business meeting with BP’s regional president for Azerbaijan, Georgia and Turkey Gary Jones and representatives of BP’s regional management.

At the meeting, SOCAR President Rovshan Najaf emphasized that the “Azeri-Chirag-Gunashli” field block will continue to make a valuable contribution to the development of Azerbaijan and the world oil industry.

Later, a tour of gas and water pumping turbines, export pumps, drilling area and other facilities of the platform was organized.

At the end of the event, which continued with a question-and-answer session, several bp employees were awarded with a letter of appreciation for their contribution to ensuring uninterrupted and safe operations of the “Central Azeri” platform.

At the Chess Olympiad, which ended in Chennai, India, two female chess players of Azerbaijan won medals for their individual performance. "Report"according to the information, ... Read More