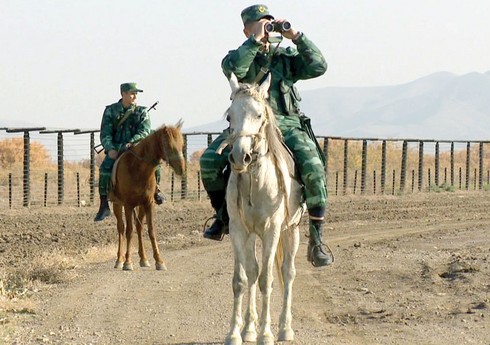 This year, a new military dormitory, a sports complex, and a service-residential complex of the border commandant “Sharur” that meet the most modern requirements in the “Nakhchivan” Separate Border Division were put to use by border guards. The construction of the 5th border outpost has been completed.

“Report” informs that this was reported from the “Nakhchivan” Separate Border Division.

It was noted that in order to ensure reliable protection of the state border, an alarm system was created along the border and modern cameras were installed. New headquarters buildings, military dormitories, warehouses, bathrooms and laundry facilities, auxiliary buildings, fully equipped residential buildings for the families of border guards have been built and put into use in accordance with modern requirements.

Improvement of provision and supply of personnel, provision of border outposts with modern techniques and equipment are also constantly in focus. The created modern infrastructure and material and technical equipment contributed to the improvement of combat readiness and the provision of professional personnel. According to the mutual action plan in the service areas of the border commandments, training exercises were held with the participation of the border outposts of the border commandments of the Border Division and personnel of the Agile operation battalion on the topic “Movement of border units in case of violations of the state border and carrying out border searches”. The experience gained in the training and the habits gained by the personnel ensured reliable protection of the state border.

The participation of the relevant units of the Border Division in the training and improvement of the officer staff in the training sessions held at the Central Headquarters for various specialties was ensured.

The training of specialists for the Border Division and the training of military personnel in these courses were organized in the courses “Gizir training” and “Training of active military servicemen”.

“Today, every border guard vigilantly protects our state borders, which are the trust of our great leader and our independence, as well as fighting against international terrorism, subversive forces, and smuggling”, – reported by the “Nakhchivan” Separate Border Division.

It is noted that the personnel of the “Nakhchivan” Separate Border Division feel more encouraged by the conditions created and the high level of care provided, and will continue to reliably protect the borders of the Nakhchivan Autonomous Republic of Azerbaijan and show vigilance.

Ministry of Defense: “Currently, there is relative calm on the state border”

After the "Revenge" operation carried out by the Azerbaijani Army, there is relative calm in the territory of Azerbaijan, including the state border, where the ... Read More

142 thousand people were evacuated from border regions in Kyrgyzstan

The process of evacuation of Kyrgyz citizens living near the border with Tajikistan, where the clashes took place, has been completed. "Report" reports that Bolot ... Read More

The reality caused by Armenian provocations – create a buffer zone near the border of Azerbaijan!

Another provocation by units of the Armenian armed forces was prevented this night. This time, in the directions of Dashkasan, Kalbajar and Lachin of the ... Read More