Repair of 4 roads has started in Binagadi settlement of Baku 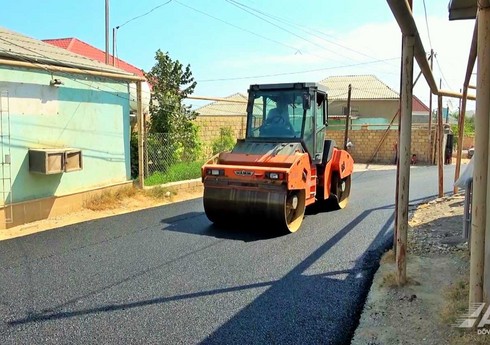 State Agency of Azerbaijan Highways Total length of Binagadi settlement of Binagadi district of Baku 2,4 which is kilometers 4 started repair work on the street.

“Report” informs that the Agency has released information about this.

According to information, the streets that have been repaired are Aliheydar Garayev, Aghamirak Isfahani, Mikayil Alakbarov and Jafar Jabbarli streets.

At present, the works of laying a new asphalt-concrete cover on Aliheydar Garayev Street have been started. As part of the repair works carried out earlier, unsuitable soil was excavated and removed in necessary places, backfilling works were carried out, and the new road base and street were profiled.

In accordance with the sequence of completion of works, the laying of new asphalt-concrete cover will be continued on Aghamirak Isfahani, Mikayil Alakbarov and Jafar Jabbarli streets.

The total length of Binagadi region according to the “Investment Program” of the current year 13,06 km street and road repair works are being carried out.

By the agency in 2021 for Binagadi district 15,4 kilometer long street was repaired.

A plaque about Baku has been installed in the garden dedicated to twinning cities of Tbilisi in the capital of Georgia. “Report”According to the local ... Read More

8 international exhibitions will be held in Baku in September-November

In September-November of this year, 8 exhibitions will be held at Baku Expo Center under the organization of "Caspian Event Organizers" and "Iteca Caspian" companies. ... Read More

NEWER POSTRanking of banks in Azerbaijan according to the amount of funds in the Central Bank (07.01.2022)
OLDER POSTMevlud Çavuşoğlu discussed Ukraine with his Chinese counterpart