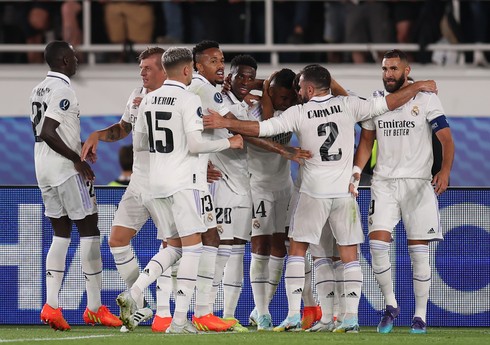 The match for the UEFA Super Cup was held in Helsinki, the capital of Finland.

“Report”According to the information, the match played between the Spanish “Real Madrid” and the German “Eintracht (Frankfurt)” teams at the Helsinki Olympic Stadium was managed by the English FIFA referee Michael Oliver.

The match ended with a 2:0 victory of the “royal club”. The goals were scored by David Alaba in the 37th minute and Karim Benzema in the 65th minute.

“Real Madrid”, which won the Super Cup for the 5th time, reached the Spanish “Barcelona” and the Italian “Milan” clubs in this indicator. Currently, these 3 teams are the collectives that have won the title the most.

It should be noted that UEFA used the Semi-Automated Offside Technology for the first time in the match. The new system works thanks to special cameras that can monitor 29 different body points of each player.

NEWER POSTZelensky: “The duration of the Ukraine-Russia war depends on two factors”
OLDER POSTLeyla Aliyeva watched the performances of our wrestlers at the 5th Islamic Solidarity Games