Prosecutor General: A plan of measures against “racket journalism” should be prepared. 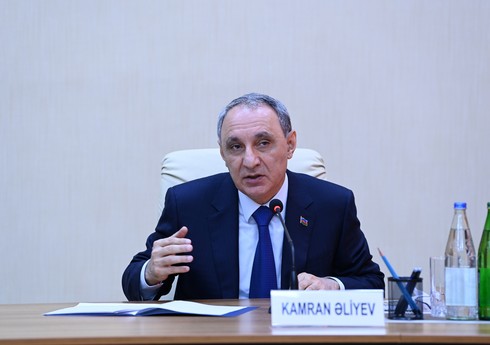 “Racket journalism” is a criminal activity, and those involved in it are held accountable. Legal measures are being taken against them.”

“Report”According to the report, Chief Prosecutor Kamran Aliyev said these thoughts in an interview to “Real TV”.

He said that sometimes social media users or employees of press agencies consider themselves to be fully trained lawyers:

“They readily provide some complex opinions and hold strong opinions on legal issues. This is unacceptable. Because the science of law is a rather complex science. It is as complex a science as it sounds. Therefore, legal issues, evidence, evidence analysis, evidence evaluation are carried out by investigators, prosecutors and judges. Without knowing the case, without knowing the intricacies of the case, without knowing the evidence, even as we mentioned earlier, for example, it is unacceptable to make opinions about the “Tartar case”. I believe that we should prepare and implement certain measures together with journalists and media organizations in this area,” he said.

“Actually, when I say “racket journalism,” I don’t think it only refers to journalism. “Racket journalism” is also a conventional term. Here we are talking about threats without demands. It is sometimes using journalistic activity or journalists’ self-activity. This is it is not only related to journalists, but sometimes it is also committed by social media users. This is specifically called solicitation by threats in the Criminal Code. Such cases are unacceptable. This is a purely criminal activity that has nothing to do with journalistic activity. Which “Not only in journalism, but also in other types of activities, we see and observe this, and we detect such facts and bring people to justice,” the Chief Prosecutor stressed.

The Ombudsman met with the General Secretary of PACE

Ombudsman Sabina Aliyeva's meetings with officials continue in Strasbourg. As part of the visit, the Ombudsman had a meeting with the Secretary General of the ... Read More

The Minister of Foreign Affairs of the Republic of Azerbaijan, Jeyhun Bayramov, delivers the National Statement at the 77th session of the UN General Assembly. ... Read More