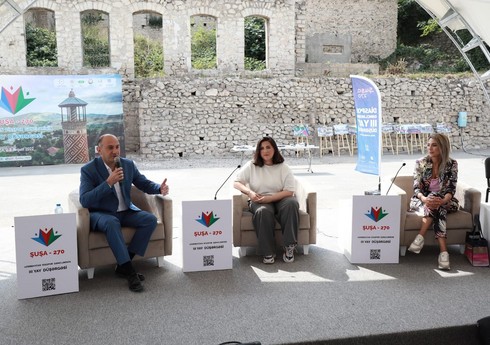 A meeting was held with well-known bloggers of Azerbaijan as part of the III Summer Camp of Diaspora Youth held in Shusha.

“Report” was informed about this by the State Committee for Work with Diaspora.

It was noted that the editor-in-chief of 365.az website, blogger Kubra Maharramova and the head of the influencer marketing company Aliya Jalil took part in the meeting moderated by Jahid Kazimov, the advisor to the chairman of the committee.

Kübra Maharramova, who said that her paternal origins are from Shusha, said that organizing a camp for diaspora youth in our cultural capital is a very important event: “Wherever you are in the world, the mountains and stones of these lands will always give you strength.”

Emphasizing that they encountered various provocations during the information war against our country during the Patriotic War, the editor-in-chief noted that despite all the difficulties, they received strong support from the diaspora youth: “Our young people living in four corners of the world read the information disseminated by our websites: “Karabakh is Azerbaijan!”, “Azad Shusha”, ” Pray for Ganja!” and other hashtags were immediately shared on social networks. You gave us this advantage in the information war.”

Aliya Jalil noted that our young people came out of the battlefield and the information war with open foreheads and faces: “We won both in the trenches and in social media networks. I thank each of you for that.”

Kübra Maharramova said, “It seems to me that Mr. President Ilham Aliyev was the most powerful influencer in our country. All our citizens and Azerbaijanis around the world, even I, who am not on Twitter, subscribed to his page so that we can immediately learn about what is happening,” the idea was met with applause from the camp participants.

The bloggers called upon the diaspora youth to promote the truths of Azerbaijan logically and in an organized manner and voiced their recommendations in this direction.

The event continued in an interactive question-and-answer format.

Our diaspora in Poland wishes success to “Karabakh” in the match against “Lex”.

On July 12, Aghdam's "Qarabag" club will play the return match of the first qualifying round of the UEFA Champions League against the Polish "Lex" ... Read More

On September 3, Azerbaijan Diaspora Volunteers organized a visit to our cultural capital Shusha. About it "Report"a was informed by the State Committee for Work ... Read More

NEWER POST45,000 tons of ammunition brought to Ukraine from NATO countries were destroyed
OLDER POSTMahir Mammadov was again elected as the vice-president of FIDE