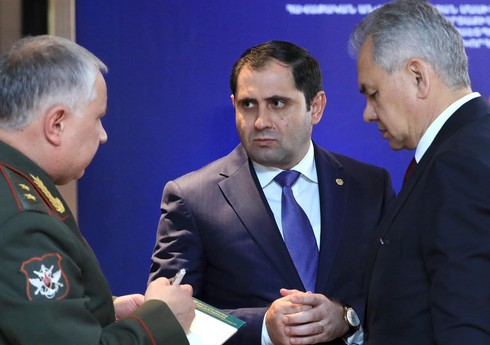 “I had a brief conversation with the Minister of Defense of the Russian Federation right after the meeting (KMT Collective Security Council meeting – ed.). We exchanged views with Sergey Shoigu on a number of issues of bilateral interest, as well as cooperation in the field of defense,” S. Papikyan said.

It should be noted that a meeting of the Collective Security Council of the CSTO was held on November 23 in Yerevan, the capital of Armenia, with the participation of the secretaries of the national security councils of the member states of the Collective Security Treaty Organization (CSTO), as well as the ministers of foreign affairs and defense.

"SOCAR Trading", a subsidiary of the State Oil Company of Azerbaijan (SOCAR), and "Sonatrach" of Algeria discussed the expansion of cooperation on energy products. “Report”According ... Read More

Five-way cooperation in the Caspian Sea basin will help to eliminate the negative consequences of the coronavirus pandemic and shocks in economic processes in the ... Read More

NEWER POSTMEDIA: “Johnny Depp will return to the role of Jack Sparrow”
OLDER POSTMinistry of Defense: “Information about the injury of an Armenian military serviceman is a lie”