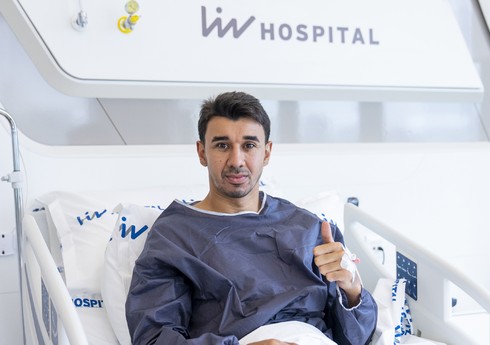 “Neftchi” football player Azer Salahli was operated on with a diagnosis of a fracture of the 5th right metatarsal bone.

“Report” referring to the club’s official website, it is reported that the surgical intervention was performed in one of the health sponsor’s hospitals. The 28-year-old defender will be out of action for about 3 months.

It should be noted that on August 11, Azer Salahli was injured and replaced in the first half of the return match against Vienna Rapid in Austria of the third qualifying round of the UEFA European Conference League.

A few days ago, Kostas Manolas, who changed the Greek "Olympiakos" to the United Arab Emirates club "Al-Sharjah", faced a curious incident at the presentation ... Read More

Conference League: The Turkish football player was nominated for the title of the best of the week

Candidates for the name of the best player of the week have been announced after the II round matches of the UEFA Conference League group ... Read More

"We did not play fantastic football. We had to win. We did it. We are not in our peak form yet." "Report"According to the information ... Read More

NEWER POSTFIFA canceled its decision on the match between Brazil and Argentina
OLDER POSTIslamia: Azerbaijan won its first gold medal in swimming