Namig Abdullayev: “We are satisfied with the results obtained in the Islamic Games” 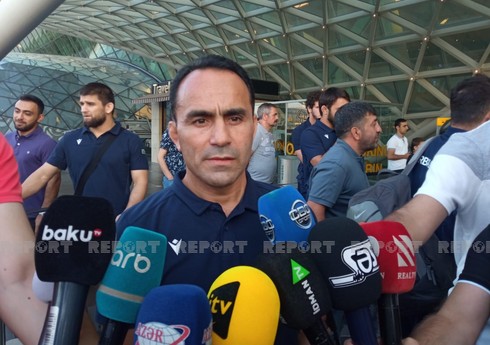 “We are satisfied with the results achieved by freestyle wrestlers at the 5th Islamic Solidarity Games.”

“Report”According to the information, this was said by Namig Abdullayev, the head coach of the Azerbaijan national team in freestyle wrestling.

“All conditions were created for the 5th Islamic Solidarity Games by the Azerbaijan Wrestling Federation, the National Olympic Committee, and the Ministry of Youth and Sports.

“As for the races, the results are satisfactory. But it could be better, our other athletes could perform well.

Obtaining 8 medals in ten weights is appreciated by the federation, the ministry, and the National Olympic Committee,” said Namig Abdullayev.

“The world wrestling championship is waiting for us. We will try to eliminate the mistakes in the Islamic Solidarity Games and participate better in the world championship”, N.Abdullayev added.

Champions League: The return games of the first qualifying round will start

Today, the return matches of the first qualifying round of the UEFA Champions League will start. According to "Report", 10 matches will be played on ... Read More

Today, 2 more games of the 6th round of the Azerbaijan Premier League will be held. "Report"according to the information, the first match of the ... Read More

Two more matches of the second round of the Azerbaijan Premier League will be held today. According to "Report", in the first match of the ... Read More

NEWER POSTElectricity production in Azerbaijan increased by 3%
OLDER POSTThe grain area in Nakhchivan has increased by 745 hectares, and the harvest is over