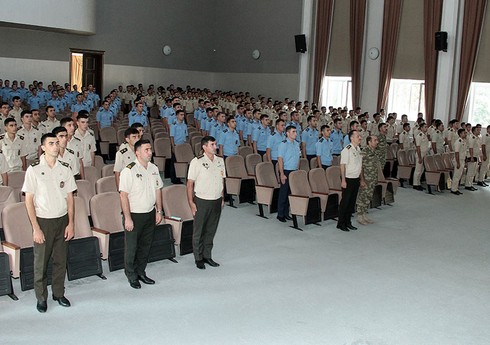 In the Military Institute named after Heydar Aliyev and Military Lyceum named after Jamshid Nakhchivanski, in September 2022, with the aim of constantly raising the spirits of those who died for the independence and territorial integrity of our country, “Martyrs do not die – the Motherland is not divided!” commemorative events were held.

From the Ministry of Defense “Report”According to the information given to the Ministry, representatives of the ministry and the public, family members, relatives and comrades of the martyrs participated in the events. First, the national leader of our people Heydar Aliyev and our martyrs who died for the sovereignty, independence and territorial integrity of Azerbaijan were commemorated with a minute of silence. The National Anthem of the Republic of Azerbaijan was played.

The speakers at the event spoke about the importance of the brilliant Victory won by our mighty Army over the enemy under the leadership of Supreme Commander-in-Chief Muzaffar Ilham Aliyev, the heroism and valor shown by the sons of Azerbaijan in the Patriotic War, as well as the decisive action taken by our units against the large-scale provocation of the Armenian armed forces on September 12-14, 2022. they talked about retaliatory measures.

Then the video clips dedicated to the victory of the Azerbaijani army in the 44-day Patriotic War and the glorious battle path of our martyrs were shown.

In the end, the creative team of the Army Ideological and Cultural Center named after Hazi Aslanov and the cadets of special education institutions presented artistic compositions glorifying heroism, patriotism, bravery.

Commemoration ceremonies dedicated to the memory of Hamdam Agayev, Atem Aliyev and Adil Ibrahimli, who rose to the height of martyrdom for the territorial integrity ... Read More

NEWER POSTA boat sank in Bangladesh, more than 20 people died
OLDER POSTUkraine has released information on how to leave the occupied territory through Azerbaijan