“Kepaz” fans opened an interesting banner in the game with “Neftchi”. 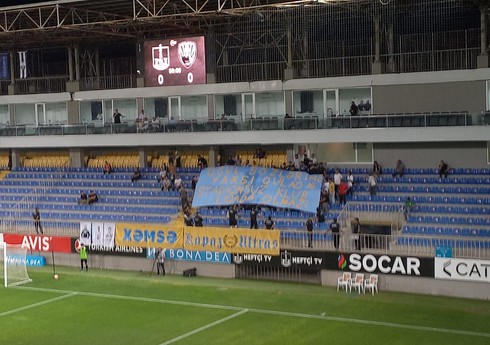 “Kepaz” fans opened an interesting banner in the 2nd round game of Azerbaijan Premier League against “Neftchi”.

“Report”according to the information, the fans expressed their displeasure because they could not play their home games at Ganja city stadium.

The banner reads “Son, listen carefully to my words, a club without a stadium will not be in the league.”

It should be noted that the stands of the Ganja city stadium are in a state of disrepair, so the regional club will host its opponents in Gabala. In the first round, the team lost to “Zira” with a score of 1:2 and played the match at “Dalga Arena” in Baku. So far, the score has not been opened in the match between “Neftchi” and “Kepaz”.

UEFA has imposed restrictions on fans in the game against “Olympiakos” against “Qarabag”.

UEFA imposed restrictions on the fans of the Greek team "Olympiakos" in the third round match of the European League group stage against "Garabagh". "Report" ... Read More

"We expected it to be a difficult game. We didn't perform badly until the first goal. We intended to make certain changes in the second ... Read More

NEWER POST“Shamakhi” head coach: “The score is not that important for us”
OLDER POSTArtistic gymnasts of Azerbaijan finished Islamiad with 6 medals