“It is wrong for the US and French ambassadors to refuse to participate in the international conference in Shusha.”

Elman Nasirov, a member of the Milli Majlis, said this in his statement to “Report”.

According to him, representatives of a number of international organizations took part in the event: “This is an event with a great political meaning and weight. The point that cannot be ignored here is that there are no representatives of two countries – the USA and France. It is strange that here 30 During the year, we are talking about the co-chair countries of the Minsk Group of the OSCE, which are ambitious for the mission of conflict resolution and chose the goal of its implementation as the main goal. During that period, the co-chairs, including the United States and France, did not provide any support for the resolution of the conflict. Both countries and the UN They were permanent members of the Security Council. It was with the participation of these two states that 4 resolutions on the settlement of the Armenia-Azerbaijan Nagorno-Karabakh conflict were adopted in 1993. The implementation of these resolutions did not take place for 30 years. However, according to Article 25 of the UN Charter, the implementation of the resolution It is mandatory. The USA and France did not do it.” 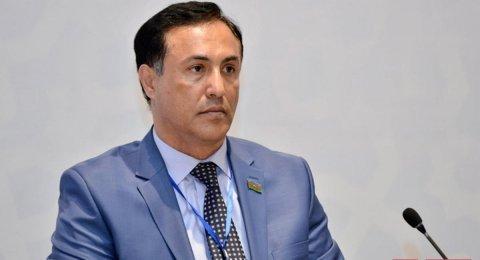 E. Nasirov said that the victory was achieved by the victorious Commander-in-Chief Ilham Aliyev and the Azerbaijani Army. Recently, it became known that the US State Department wants to revive the OSCE Minsk Group and has appointed a special ambassador for that group. What does this mean? Doesn’t the US know that the OSCE Minsk Group is not only made up of the USA and France. , there is also Russia. Russia and the United States and France are actually enemy states. They themselves buried the OSCE Minsk Group a long time ago. President Ilham Aliyev has already said goodbye to them. That is, they have not done anything. In this case, the ambassadors of the United States and France He refuses to visit Shusha and his intentions are not correct. The position of the Azerbaijani state is clear. Azerbaijan has ensured its territorial integrity. The war is over and there is no more Nagorno-Karabakh conflict. Nagorno-Karabakh is called Nagorno-Karabakh. There is no territorial unit at the moment. Today, the attempt of the OSCE to revive the Minsk group means limiting the possibilities of achieving the long-awaited peace. The word of the state of Azerbaijan is one. The Minsk Group of the OSCE does not exist for us from now on. We want to settle post-conflict issues peacefully. Against the background of new realities, other issues will be regulated in their own way. There is absolutely no place for the OSCE Minsk Group in this regulatory process.”

It should be noted that on August 27 in Shusha, the conference dedicated to the restoration and reconstruction of the liberated territories of Azerbaijan, demining, using the potential of urban development in the post-conflict period and opportunities for international cooperation began its work. A total of 180 people, including non-resident ambassadors accredited in Azerbaijan and working in Ankara, Tehran and Moscow, other representatives of the international diplomatic corps, military attachés, representatives of international organizations, high-ranking officials of the Ministry of Foreign Affairs of Turkey and other state institutions, attended the event. a close foreign representative is present. Among the representatives are the European Union, the United Nations and the High Commissioner for Refugees of this organization, the United Nations Children’s Fund, the Development Program, the Population Fund, the World Bank, the Organization of Turkish States, the Turkish Culture and Heritage Foundation, TURKSOY, Aviation and Airspace Use Heads of the delegations of the Interstate Council for Migration, the European Bank for Reconstruction and Development, the Islamic Conference Youth Forum for Dialogue and Cooperation, the International Organization for Migration, the International Center for the Development of Migration Policy, covering all continents, including Great Britain, the Netherlands, Sweden, Denmark, Belgium, Germany, Italy, Holy See, Hungary, Portugal, Poland, Czech Republic, Iran, Saudi Arabia, Qatar, Bahrain, China, Philippines, Australia, New Zealand, Indonesia, Canada, Dominican Republic, Guinea, El Salvador, Mexico, Panama, Argentina , ambassadors of Brazil, Guatemala, Uganda, Rwanda, Sudan, Chad, Cameroon, Namibia, Morocco, Libya and other countries, etc. employees and military attachés of Efir units took place. However, the US and French ambassadors to Azerbaijan did not participate in the prestigious event held in Shusha.

The 2nd goal was scored in the first match of the III qualifying round of the UEFA Conference League held in Baku between "Neftchi" and ... Read More

The first round match of UEFA Conference League group D between "Nice" and Germany "Cologne" in France started later than planned. "Report"According to the information, ... Read More

A press conference was held at the Baku office of the International Eurasian Press Fund with a delegation headed by MP Cemil Yaman from the ... Read More