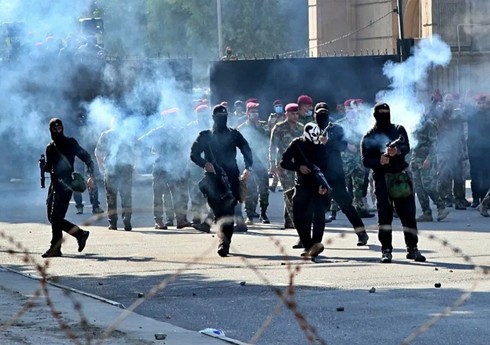 Iraqi security forces used tear gas against demonstrators in the center of the capital, Baghdad.

It is noted that the police are trying to prevent the participants of the action from entering the “green zone” where state offices and foreign embassies of the capital are located.

It is also reported that several people with severe suffocation symptoms were taken to nearby medical facilities after the use of gas grenades.

Not long ago, the “green zone” of Baghdad was hit by missiles twice. In the first case, 7 people, including an officer and two members of the security forces, were injured as a result of the bombing.

Serbia, which is completely dependent on Russian gas, plans to buy gas from Azerbaijan in 2023 after the construction of the interconnector to be connected ... Read More

China’s purchase of oil, gas and coal from Russia has reached a record volume

China increased its purchase of oil, gas and coal from Russia between March and July 2022 by $15 billion compared to the same period last ... Read More

Gas prices in Europe closed the auction with an increase of 1.3 percent

In Europe, gas exchange prices increased by 1.3% on Friday's trade and amounted to about $1,125 per thousand cubic meters. “Report” informs that this was ... Read More

NEWER POSTThe first sports club for badminton was established in Nakhchivan
OLDER POSTThere was a chain car accident in Shamkir, there are injuries