In Islamia: Azerbaijan secured the next medals 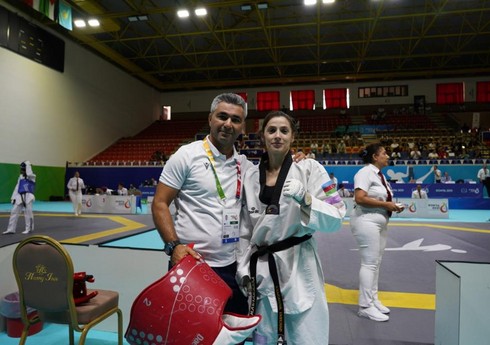 According to the report’s employee sent to Konya, he won the semi-final by defeating Eldar Birimba, the representative of Kazakhstan.

With this, the number of medals obtained by Azerbaijan at the Games of Islamic Solidarity reached 6.

Azerbaijan won the next medals at the 5th Islamic Solidarity Games held in Konya, Turkey.

According to “Report”, female taekwondo player Farida Azizova secured at least “bronze” by advancing to the semi-finals. The athlete in the 67 kg weight class won the 1/4 finals over Kazakhstan’s Feruza Yergeshova.

Javad Aghayev, who competed in 68 kg, won against Albanian Orseld Shkalla and qualified for the next round. Parviz Iskandarov (63 kg) lost to his opponent from Kazakhstan and stopped fighting.

With this, the number of medals won by Azerbaijan at the Games of Islamic Solidarity reached 5.

Azerbaijani athletes won the next medal at the 5th Islamic Solidarity Games.

With this, he ensured to win the minimum bronze award.

It should be noted that Azerbaijan won 3 medals during the first 5 days of the competition. Anna Skidan (athletics, vaulting) won gold, Alexis Kopelyo (athletics, triple jump) won silver, and Hashim Mahammadov (taekwondo) won bronze. With this result, Azerbaijan is in 9th place in the medal ranking.

After 3 years, a fan record was recorded in the Azerbaijan Premier League

5,500 spectators watched the match between "Turan Tovuz" and "Gabala" of the first round of the Azerbaijan Premier League. "Report" Referring to the official website ... Read More

The Ministry of Foreign Affairs of Ukraine issued explanatory information to its citizens about leaving the territory captured by the Russian military via Azerbaijan, Georgia ... Read More