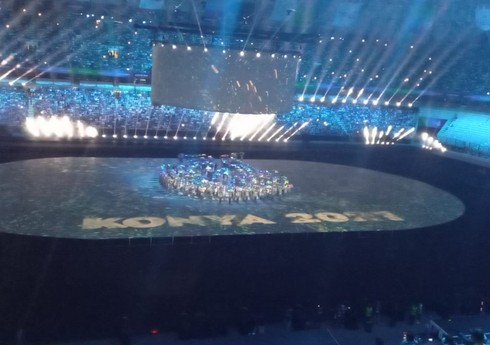 On August 9, the opening ceremony of the 5th Islamic Solidarity Games will be held in Konya, Turkey.

“Report” informs that President of the Republic of Azerbaijan Ilham Aliyev and First Lady Mehriban Aliyeva are participating in the ceremony.

The official opening ceremony of the 5th Islamic Solidarity Games has started in Konya, Turkey.

“Report”The employee assigned to Konya reports that before the event, Turkish fighter jets performed exemplary flights over the Konya Metropolitan Municipality Stadium and showed their skills.

The event started with the concert program of Maher Zayn, a Swedish singer of Lebanese origin.

Later, verses from the Holy Quran were read.

It was announced that President of Turkey Recep Tayyip Erdogan, President of Azerbaijan Ilham Aliyev, as well as leaders of other countries participated in the opening ceremony at the stadium.

Dancers will enact the logo of the 5th Islamic Solidarity Games. The logo made specially for the games in the shape of a tulip symbolizes the number 21. The logo also includes the word “أ خ”, which means “brother” in Arabic.

After the countdown, images of Anatolia’s historical and must-see places were shown accompanied by dancers. . .

The national flag of Turkey was brought to the stadium accompanied by a guard of honor and the national anthem of the brother country was played.

Volunteers were invited to the stadium and they opened the corridor for the participating countries. The arrival of the Azerbaijani delegation was met with great applause at the stadium. Greco-Roman wrestler Rafig Huseynov and volleyball player Ayşan Abdulazimova performed the function of flagbearers.

It should be noted that 4,200 athletes from 56 countries are competing in the 5th Islamic Solidarity Games. A total of 281 athletes of Azerbaijan will test their strength in Islamiad, which will last until August 18.

The match for the UEFA Super Cup was held in Helsinki, the capital of Finland. "Report"According to the information, the match played between the Spanish ... Read More

NEWER POSTChampions League: “Qarabag” scored the 3rd goal in the match with “Ferentsvaros”
OLDER POSTA dinner was held in honor of the officials who participated in the opening of Islamiad