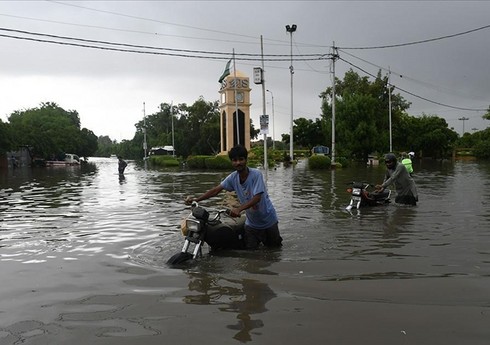 From June 14 to today, the number of people who died as a result of heavy rains in Pakistan has reached 903.

“Report” reports with reference to “Anadolu” that the country’s climate change minister Sheri Rahman wrote about this on his Twitter page.

According to the minister, 326 children and 191 women were among the dead.

Rahman noted that thousands of people were forced to leave their homes due to the natural disaster. He called the situation in the country a humanitarian crisis.

According to Sharif, the government needs hundreds of billions of rupees for relief and rehabilitation efforts.

Monsoon rains in South Asia from June to September turn into natural disasters every year.

"Ukrainians are advised to observe safety rules on the country's Independence Day and not to ignore air raid signals, as Russian invaders may resort to ... Read More

As a result of the monsoon rains that have been ongoing in various provinces of Pakistan for the past 5 weeks, the number of people ... Read More

Heavy rains in Niger have killed more than 70 people

At least 75 people have died since June as a result of floods and landslides caused by torrential rains in Niger. "Report" informs that the ... Read More

NEWER POSTThe fire in the mountainous areas of Oguz has been extinguished
OLDER POSTToday, the last teams that qualified for the group stage of the Europa League will be announced