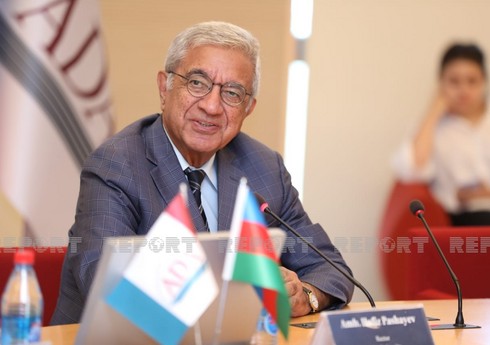 “The Caspian states can work on joint energy projects.”

Report informs that ADA University Rector Hafiz Pashayev said this during the closing ceremony of Baku Energy School No. 16.

The Rector emphasized that Azerbaijan occupies an important place in the oil and gas market, and the basis for this was laid in 1994 with the signing of the “Contract of the Century”.

H. Pashayev also noted the positive activity of the Baku Summer Energy School: “I would ask our program director to think about the future program of the school and adapt it to new realities.”

Later, a ceremony of presenting certificates to the participants of the summer energy school was held. Vice President of the State Oil Company of the Republic of Azerbaijan (SOCAR) Elshad Nasirov also participated in the ceremony.

The event is jointly organized by the Institute of Development and Diplomacy (IDD), SOCAR, “BP Azerbaijan”, “Kolin”, “Masdar” and “TotalEnergies”.

Baku Summer Energy School has been held every year since 2007.

This year, 42 people from 12 countries participated in the summer school.

One person drowned in the Caspian Sea

One person drowned in the Caspian Sea. About it "Report" It reports with reference to the Ministry of Emergency Situations (MES). The Crisis Management Center ... Read More

One person drowned in the Caspian Sea

One person drowned in the Caspian Sea. About it “Report”a was informed by the Press Service of the Ministry of Emergency Situations (MES). It was ... Read More

NEWER POSTThe opponent of “Qarabag” has extended the contract with its goalkeeper
OLDER POSTThe first meeting of the Supervisory Board of the Reconstruction, Construction and Management Service was held in Karabakh Economic Region