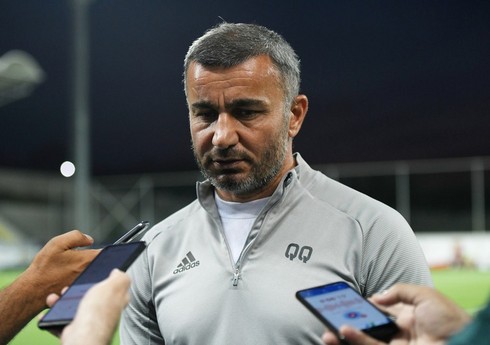 “When we went out to warm up before the game, we heard about the anti-terrorist operation. May God have mercy on our martyr.”

“Report”According to the information, this was said by the head coach of “Qarabag” Gurban Gurbanov at the press conference after the first match of the third qualifying round of the Champions League with “Ferentsvaros” of Hungary.

The 50-year-old specialist said that it is not pleasant to hear that we have martyrs: “We have to express some situations correctly. Such situations always upset us. For me, the impact of this event is very great, because we had many martyrs. Those people left their families and loved ones and sacrificed their lives to protect the homeland. it is very hard for us to go through. It has an effect on each of us. Maybe some player didn’t hear it before the game. But after the match, they were talking about it.”

It should be noted that on the morning of August 3, members of illegal Armenian armed groups in the territory of Azerbaijan, where the peacekeeping contingent of the Russian Federation is temporarily stationed, fired intensively at the positions of the units of the Azerbaijani Army located in the direction of Lachin region.

As a result, soldier Kazimov Anar Rustam oghlu, a military serviceman with a fixed term, died of a gunshot wound.

In addition, the elements of illegal Armenian armed groups tried to seize the Kyrghgiz hill, located in the mountain range covering the territory of Kalbajar and Lachin regions, and to establish new combat positions there.

As a result of the retaliatory operation “Revenge” carried out by the units of the Azerbaijani Army, the Kyrgyz hill, as well as Saribaba along the Karabakh ridge of the Lesser Caucasus mountain range and a number of other important commanding heights were taken under control. Currently, our divisions are carrying out engineering work on the construction of new positions and construction of supply roads.

As part of the operation, several combat positions of illegal Armenian armed elements were destroyed, and an air strike was made on the military unit in the Yukhari Oratag settlement of the former Aghdara region. As a result, the live force of illegal Armenian militants was destroyed and wounded, as well as several D-30 howitzers, military vehicles and a large amount of ammunition were destroyed.

Gurban Gurbanov: “We only have to play well in the Czech Republic”

"Everything is fine and in order. We just have to play well in the return match." "Report"According to the information of "Qarabag", head coach of ... Read More

"A lot can be said about this game and my players. I hold them in my arms, I congratulate each of them. We saw not ... Read More

NEWER POSTCEO of “Azerigas”: “It is possible that the explosion in Khirdalan was caused by a gas leak”
OLDER POSTThe EU appealed to Azerbaijan and Armenia