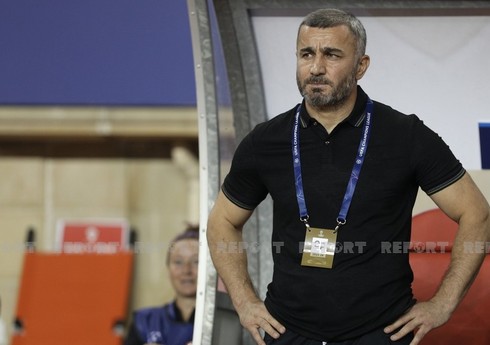 “I am very satisfied with my team. We were playing against a tough opponent. All our matches were at the playoff level. We suffered a lot. The advantage was on our side in the first half. In the second half, the opponent took advantage of our minor mistakes. We are trying to promote Azerbaijani football even more. Football is built on mistakes. I congratulate the opponent.”

“Report”According to the information of “Qarabag”, the head coach of “Qarabag” Gurban Gurbanov said this in his statement to “CBC Sport” after the return match of the UEFA Champions League playoff stage, where they lost to the “Victoria” (Plzen) team with a score of 1:2 in the Czech Republic.

The 50-year-old specialist said that his players were sad: “I talked to them, I tried to support them. This is one of the most delicate parts of football. When the players are disappointed, they cannot hold back their tears. I am with them. I am friends with all of them. I am proud of my players. We need to look forward.”

In the end, Gurbanov thanked the fans: “We always felt their support. We want to work harder and get good results.”

It should be noted that “Qarabag” will continue the fight in the UEFA European League.

Champions League: All participants of the group stage will be known today

UEFA Champions League playoff matches will be concluded today. According to the information of "Report", all the participants of the group stage will be determined ... Read More

UEFA Champions League playoff matches have been concluded. "Report"According to the information, the last 3 participants of the group stage were determined by the matches ... Read More

The number of potential opponents of "Qarabag" has decreased before the drawing ceremony of the third qualifying round of the UEFA Champions League. "Report"according to ... Read More