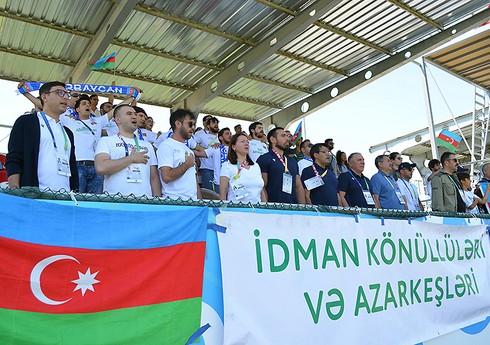 Minister of Youth and Sports Farid Gayibov and General Secretary of the National Olympic Committee Azer Aliyev met with the members of the Azerbaijan under-23 football team participating in the 5th Islamic Solidarity Games held in Konya, Turkey.

“Report” Referring to the official website of AFFA, it is reported that the football players were wished success in the meeting that took place before the third round match of group B with Morocco.

Officials of the Ministry and NOC then watched the match from the stands.

It should be noted that the Azerbaijani national team, which drew 2:2 with its opponent, reached the semi-finals.

The trade turnover between Azerbaijan and Russia increased by 17.1 percent in the first half of the year

In the first half of 2022, the trade turnover between Azerbaijan and Russia amounted to 1.57 billion dollars, which is 17.1% more than the same ... Read More

The reason for the unstable weather in Azerbaijan has been revealed

"As a result of the influence of the cold atmospheric front coming from the north, unstable, rainy and windy weather conditions have been observed in ... Read More

The championship of Azerbaijan in weightlifting will be held