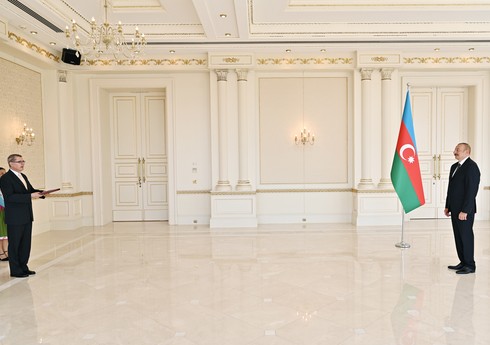 President Ilham Aliyev said that many European companies are showing great interest in the restoration and reconstruction works carried out in the liberated territories of Azerbaijan.

“Report” reports that the head of state spoke about this on August 5 when accepting the credentials of the newly appointed extraordinary and plenipotentiary ambassador of Austria to Azerbaijan, Thomas Schuller-Goetzburg.

Stating that bilateral relations between our countries are developing successfully, the head of state recalled his visit to Austria and the meetings held there with pleasure. Touching on economic cooperation, President Ilham Aliyev noted that Austrian companies have been successfully operating in Azerbaijan for many years.

The President of Azerbaijan expressed his hope that Austrian companies will actively participate in construction, infrastructure and other fields in the territories freed from occupation.

At the same time, the head of state mentioned the fields of transport, trade, high technologies, tourism, agriculture, and construction in Azerbaijan-European Union cooperation.

Some residential areas of Goranboy remained without electricity

Due to the windy weather, there was a break in the supply of electricity in several villages and towns of Goranboy. "Report"According to the information ... Read More

Ministry: “The fire in Masalli was prevented from spreading to wider areas”

The fire that broke out in a mountainous area with complex terrain near Garibler village of Masalli district was prevented from spreading to wider areas. ... Read More

NEWER POSTBilal Haye: “Azerbaijan takes a principled position on the issue of Jammu and Kashmir”
OLDER POSTA woman was raped in Absheron