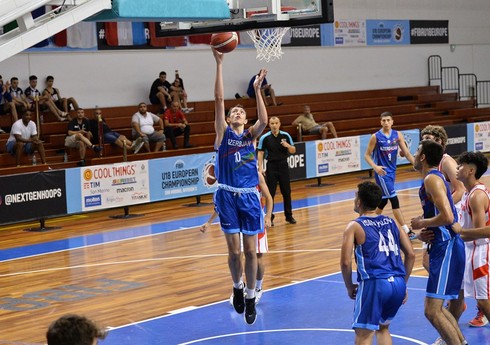 The Azerbaijani national team, consisting of under-18 basketball players, played its next game in the European youth championship organized in San Marino.

“Report”According to the information, the team, which is in the C division and qualified for the semi-finals in the last round, faced Moldova in its last match in the B group. The match ended with a 75:66 victory for Azerbaijan.

The opponent of the national team in the semi-finals will be announced later.

It should be noted that in the first game of the group, the team won against “Luxemburg” 75:71, in the second match against Gibraltar 115:60, and in the third match against Armenia with a score of 76:65.

Today, the Azerbaijan national women's volleyball team will hold its next match in the qualifying round of the 2023 European Championship. "Report"According to the information, ... Read More

The "Beerbasha" team of Azerbaijan played its next game in the mini-football Champions League. "Report"According to the information, the team in Group B met the ... Read More

NEWER POSTThe closing ceremony of the Youth Summit of the Non-Aligned Movement was held in Baku
OLDER POSTProsecutor General: A plan of measures against “racket journalism” should be prepared.