Deputy Minister: “Customs control between Azerbaijan, Georgia and Turkey will not be repeated” 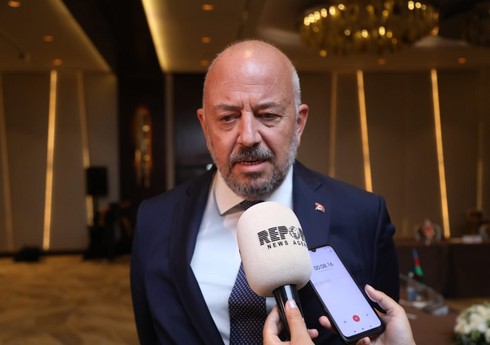 It is planned to finish some works related to the implementation of the Agreement between the governments of Azerbaijan, Georgia and Turkey on the initial exchange of information for the facilitation of transit customs procedures within the framework of the Baku-Tbilisi-Kars (BTQ) railway project within 3 months.

This “Report”Riza Tuna Turagay, Deputy Minister of Trade of Turkey, said in an exclusive statement.

According to him, it is planned to implement simplified customs service between the countries and share risk analyzes by providing information exchange in advance: “When risk analyzes are shared, control will not be repeated, but effective and on-site control will be carried out. At present, the customs administrations of Azerbaijan, Georgia and Turkey carry out the same control. This causes a waste of time.

Currently, its infrastructure is being built, related works need to be implemented so that we can achieve success in trade. The customs departments of all three countries are working in this direction.”

R. Turagay reminded that the first meeting of the Tripartite Committee on Customs Issues between the governments of Turkey, Azerbaijan and Georgia was held in Izmir in October last year, and today the second meeting was held in Baku: “We will follow the topics discussed today until the third meeting. Simplified customs services “We will intensify our work on

It should be noted that the Baku-Tbilisi-Kars railway line was opened on October 30, 2017. The railway line connects the railway networks of Asia and Europe. It is the shortest route not only between the 3 countries, but also between Asia and Europe. BTQ time spent on cargo transportation 2 allows you to shorten more than once. BTQ railway facilitates access to European and world markets of Central Asian countries – Turkmenistan, Kazakhstan, Uzbekistan, Kyrgyzstan, Tajikistan and Afghanistan.

Changes will be made in normative legal acts related to fire safety in forests in Azerbaijan. "Report" reports that this was stated by the Minister ... Read More

The commander of the army corps, Major General Kanan Seyidov reported to the Commander-in-Chief of the Armed Forces, President Ilham Aliyev, about the location of ... Read More

NEWER POSTEmin Amrullayev thanked the President for adding teachers’ salaries
OLDER POSTTwo-time winner of Islamiada: “After playing on the field, we realized that we are stronger than Mali”