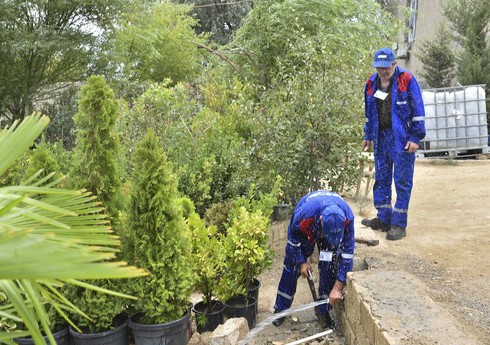 In accordance with the “Action Plan for 2020-2022 on ensuring the efficient use of water resources” approved by President Ilham Aliyev, as a result of the investigations conducted to prevent water losses and wastage, cases of unaccounted and unmetered water use were discovered in Sabunchu and Ramana settlements of Baku.

“Report” “Azersu” OJSC informs about this.

According to information, during the inspection of the water supply system of the “Aylin” kindergarten in Sabunchu settlement, it was found that the facility was illegally connected to the water line without obtaining technical conditions. Illegal use of drinking water was found in tandoor, doner and cafe located in the settlement area. In the Yeni Ramana housing estate, a case of water theft was also found in the facility where trees and decorative flowers are sold. Irrigation works are carried out here through an illegally built water line. The water supply of the farm and internet club operating at the same address in New Ramana is carried out through an illegally constructed line.

Detected illegal water lines were canceled, an act was drawn up and the damage was calculated. Entrepreneurs were informed about the legal connection to the water network and were told that the global climate change has led to the reduction of fresh water resources of our country, and in such a situation, wasteful use of water is unacceptable. Illegal and wasteful use of drinking water leads to disruption of hydraulic regimes in networks, serious water losses, deterioration of water supply to other residents living in those areas. In order to prevent such illegal situations, measures will be continued regularly, arbitrarily drawn and off-meter lines will be canceled, and those who repeat such situations will be referred to the law enforcement agencies.

In Baku, a man and a woman stabbed each other, and the woman’s eye went out

A man and a woman stabbed each other in Baku. “Report”According to the information, the incident was recorded in Sabunchu district. Thus, a person named ... Read More