Before the “Neftchi” – “Aris” match, the children of martyrs came to the field 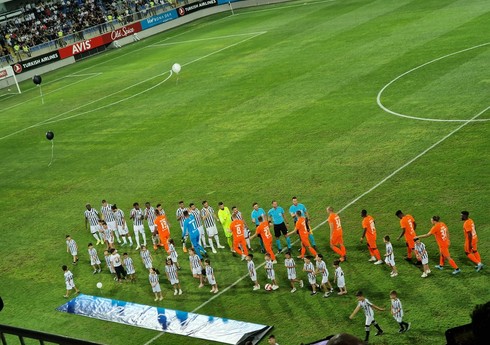 “Neftchi” club took a significant step before the return match of the second qualifying round of the UEFA European Conference League against “Aris” of Cyprus.

“Report” informs that the members of both teams and 3 referees came to the square with the children of the martyrs who died in the Karabakh war.

25 children of martyrs who participated in the summer camp of “Neftchi” stepped on the lawn. The numbers of minors in the uniform of “Neftchi” were symbolically “44”. What distinguishes them from each other are the names of their martyred fathers above the numbers on their backs.

It should be noted that the match, which started at 21:00, has not yet been scored. “Neftchi” needs to beat the Cypriot club by 3 goals to qualify for the stage.

NEWER POST“Neftchi” scored the third goal in the game against “Aris”.
OLDER POSTGurban Gurbanov: “We got a lot from the match against Zurich”