At least 14 people, including two ministers, were injured in an explosion in Somalia

At least 14 people, including two ministers, were injured during the explosion in Somalia.

“Report” reports that about it released information.

A truck exploded at the entrance of the “Nur Dob” hotel near the presidential complex in the city of Jouxar. During the incident, the building, as well as nearby houses, were significantly damaged.

According to the publication, among those injured in the explosion are the ministers of health and women’s affairs, as well as the former deputy chairman of the parliament of the Hirshabel autonomous region.

“Xinhua” agency, referring to the press secretary of Hirschabel state, reported that two people died and 15 people were injured during the explosion.

A strong explosion occurred near a hotel in Joukhar, the capital of Somalia’s southern state of Hirshabelle.

“Report” According to TASS, the National Television of Somalia reported on this.

According to information, a car bomb exploded near the hotel and the terrorist died.

According to the “Somali Guardian” news portal, the number of dead may be several dozen. “Goobjoog News” portal reported that three state government ministers were injured in the hotel building.

The area was cordoned off by the police.

State authorities have already blamed al-Shabaab for the attack. 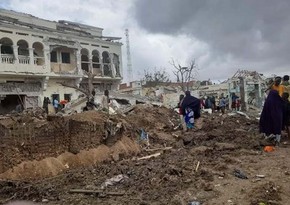 There was an explosion at a Russian military base in Luhansk

An explosion occurred in the Lugansk region of Ukraine, which is occupied by Russia. “Report” With reference to UNIAN, it is reported that footage of ... Read More

A criminal case was opened in connection with the mine explosion in Kalbajar. "Report" reports that this is stated in the information of the military ... Read More