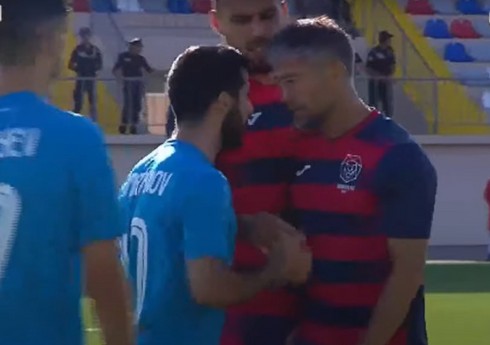 An incident occurred in the opening match of the third round of the Azerbaijan Premier League between the team of the same name and “Sabail” in Shamakhi.

“Report”according to the information, it was caused by the captain of the home team, Elvin Mammadov, playing rough against the attacker of the guests, Aghabala Ramazanov.

Although the players attacked each other due to the episode of the game, their teammates did not allow the scandal to grow. The chief referee of the match, Vugar Hasanli, punished both players with yellow cards.

It should be noted that the second half of the match is currently being played and “Sabail” is leading – 1:0.

“Victoria” football player: I am looking forward to the game with “Qarabag”

"I am looking forward to the playoff game. Because I have never been a participant in such a meeting before." "Report"according to the information of ... Read More

Asim Khudiyev was assigned to the game of “Twente”.

NEWER POSTYashar Bashirov: “We have all the medals of Islamiad”
OLDER POSTFormer Minister of Communications: “Iran has been violating the terms of the agreement until now”