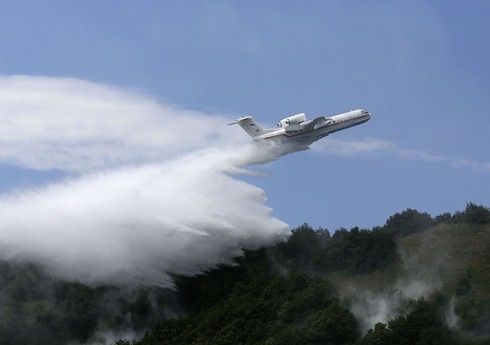 In the Northern and North-Western regions of Azerbaijan, measures are being taken to put out the fires that have occurred in some forest and surrounding areas.

“Report” informs that the Ministry of Emergency Situations (MES) released information about this.

It was noted that firefighting operations are carried out in complex mountainous terrain and in areas near residential areas. Hot and windy weather conditions prevent complete extinguishing of fires.

Currently, the fire fighting measures include the forces and special equipment of the State Fire Protection Service, North and North-West regional centers, Civil Defense troops and Special Risk Rescue Service, BE 200 ЧС amphibious aircraft and 2 helicopters belonging to the Aviation Department of the Ministry of Foreign Affairs, as well as Ecology and employees of the Forestry Center of the Ministry of Natural Resources, relevant equipment of “Azersu” OJSC, local Executive Power and residents were involved.

The Ministry of Emergency Situations once again appeals to the population to strictly observe the fire safety rules, especially in these days when the weather is hot and dry, and to avoid any carelessness that could cause a fire.

Measures to extinguish the fire in Shabran district are continuing. At present, the “BE 200 CS” amphibious aircraft of the Ministry of Emergency Situations (EMERG) aviation unit was involved in the work of extinguishing the fire accompanied by a strong wind in the village of Zorhami of the region.

About it “Report”was informed by the Ministry of Foreign Affairs.

Turkish Air Force personnel and aviation equipment that will participate in the "TurAz Eagle - 2022" joint tactical-flight exercise have arrived in our country. About ... Read More

NEWER POSTIslamia: Azerbaijan won its first gold medal in swimming
OLDER POSTThe first lady of the United States is infected with the coronavirus