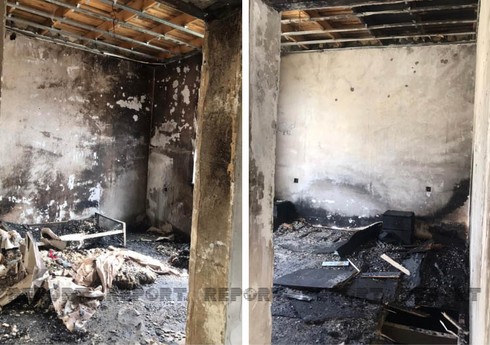 Shikar Abdullayev, who burned his wife’s house and injured his stepdaughter with a knife, was arrested in Barda.

“Report”According to the information of Karabakh office, he used to go to wedding ceremonies held in wedding palaces to avoid law enforcement agencies.

An uninvited guest to the wedding ceremony held today in “Metin” wedding hall in Barda was arrested by law enforcement officers.

A man in Barda is suspected of burning his wife’s house.

“Report”According to the Karabakh office, the incident was recorded last night in the village of Aliyanli. According to allegations, Abdullayev Shikar Nureddin oghlu, born in 1993, set fire to the house belonging to the daughter of Karimova Jamila Firdovsi, his wife, who wanted to divorce him.

Sh.Abdullayev is the second wife of J.Karimova. Recently, a family conflict often occurs between them. For this reason, Jamila Karimova applied to the court for divorce. However, Sh.Abdullayev threatened to burn down the house.

Sh.Abdullayev, who came home last night around 11 p.m., physically forced his wife and beat her. The woman who was in danger of being suffocated by her husband called her neighbors for help. Sh.Abdullayev stabbed 9-year-old Fatima Ismayil Orujova’s right arm, the daughter of Jamila’s first wife.

Seeing that the neighbors came to help, Sh.Abdullayev ran away from the scene.

The law enforcement agencies were informed to conduct a legal investigation into the incident.

The person acquitted by the court was arrested

As previously reported, on 10.02.2022, the Barda district court acquitted the accused under Article 152.1 of the Criminal Code (having sexual relations with a person ... Read More