A minibus carrying tourists fell into a cliff in Turkey, 18 people were injured 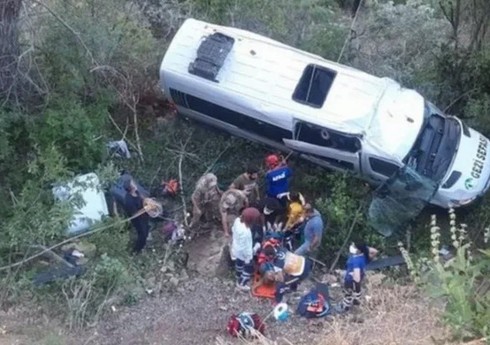 A minibus carrying tourists returning to the city of Malatya from the Black Sea coast in Turkey fell into a cliff. As a result, 18 people were injured.

Referring to the Turkish media, “Report” informs that the accident occurred at the 44th kilometer of the Tunceli-Erzincan road. The driver lost control and the bus went off the road.

A large number of doctors, rescuers, firefighters and gendarmerie brigades were sent to the scene. The injured were brought to the Tunceli State Hospital, where they received medical assistance.

Today, the first ship carrying Ukrainian grain left the port of Odessa. “Report” informs that the information was spread by "CNN Turk". It was reported ... Read More

The Ukrainian "An-12" aircraft, which crashed in Greece, was carrying 11.5 tons of Serbian weapons to Bangladesh, and the information about the transportation of weapons ... Read More

NEWER POSTRussia returned 2.5 thousand tons of tomatoes imported from Azerbaijan in the first half of the year
OLDER POSTIn Ecuador, the football player scored a goal from a distance of more than 70 meters