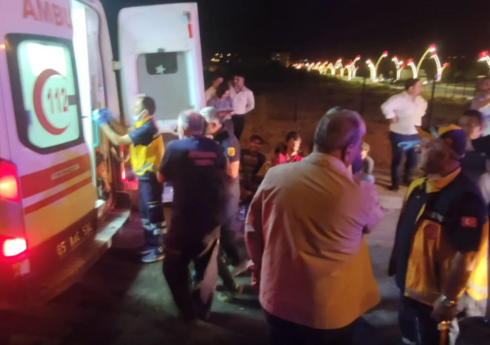 There was a serious road accident in Turkey.

About it “Report” It reports with reference to “Haber Global”.

According to information, the incident was recorded in Van province. 1 person died and 13 others were injured as a result of a collision between a minibus carrying illegal migrants and a passenger car in Gevash district.

The van driver fled after the accident. Operational measures have been started to maintain it.

Emergency workers, police and rescuers were involved in the incident. The injured were taken to hospitals.

The Ukrainian "An-12" aircraft, which crashed in Greece, was carrying 11.5 tons of Serbian weapons to Bangladesh, and the information about the transportation of weapons ... Read More

A bus carrying 43 citizens of Ukraine overturned near the city of Vrancea in the east of Romania. "Report" about this “Digi24”reports with reference to ... Read More

The inspection of the ship carrying Ukrainian grain has been completed

The inspection of the ship bringing corn from Ukraine by representatives of Turkey, Russia, Ukraine and the UN has ended. "Report" informs that this was ... Read More

NEWER POST“Euronews”: “Azerbaijan has a lot to discover”
OLDER POSTThe opponent of “Qarabag” won its next victory in the Bundesliga